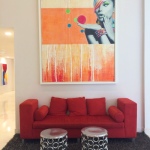 And it’s super affordable by Disney World standards (room rates start at $123 for a mid-week stay in early Mary 2022).

This B Resort and Spa Orlando hotel review was originally posted in 2015. We have updated information to be accurate as of April 2022 when possible.

With inexpensive rates, Disney World transportation, lots of amenities (including a pool!), and a convenient location that lets you skip all the hassle of driving to Disney Springs, it’s a perfect location for a staycation for visitors coming to spend time at Walt Disney World.

We recently spent a weekend at the B Resort and Spa in Orlando and had such an amazing time! There is nothing quite like being able to just walk out the door and walk to Disney Springs (only a 6 minute stroll).

Upon checking in, you will notice the fresh, colorful and airy vibe of the resort. With white walls and lots of colorful artwork, the resort is playful and fun without being stark or too modern.

The hotel is a fun place that is unlike the décor of any other resort on Disney property that we have been to. The B Resort is young and modern and hip and we like that.

The B Resort at the Walt Disney World Resort is just one of their resorts, including a location in Ft. Lauderdale and the Florida Keys.

The B Resort on Disney property has 394 guest rooms and suites. The B Resort officially opened in Downtown Disney in June 2014.

We stayed in a Stunning Park King Room (that was the name in 2015, I assume it must be the Fireworks View room, now, but be sure to confirm with the hotel). The room is located on floors 12-17 with views overlooking Disney Springs, including Epcot and its fireworks display.

Our room was 1616, and might I say this room was HUGE!! Seriously, it was a King Size bed with pull-out couch, but there was ample space to move around.

The bathroom was massive, too, with a walk-in shower that spanned the entire width of the bathroom. Watch our video review below to see how big it is!

Instantly, the first thing that you focus on is the view outside the window. Floor to ceiling windows overlooking Disney Springs showed off the entertainment area in a vantage point often not enjoyed. We could even see the hotels and major attractions spanning the Orlando area skyline around the Walt Disney World Resort.

When the Characters in Flight hot air balloon went up, we saw it hovering over Downtown Disney. When the Rainforest Cafe’s volcano erupted with flames, it was a stunning show from our room.

You can also see Planet Hollywood and the Genie popping up out of World of Disney.

When Epcot’s Illuminations fireworks show started, we could see the fireworks over Spaceship Earth.

What was a HUGE surprise, though, was watching Disney’s Hollywood Studios fireworks display from our room. Because Disney’s Hollywood Studios does not have regularly scheduled fireworks, it is usually not talked about in marketing materials. When they do have fireworks, though, such as the Star Wars Weekends fireworks show we saw for two nights, the show is absolutely amazing from this view!

It is a shame that you can’t open the sliding glass doors for a better view of the fireworks (they only open a few inches wide), so you’ve got to take pictures and videos through glass. However, the show is absolutely fantastic!

In our pictures, you will see a frog on the bed. The B Resort has a B Humane program, with proceeds of buying the stuffed Benson the frogs donated to protect the gopher frog, an endangered species in Lake Buena Vista.

The bed is our room was amazing! Part of the Blissful Beds amenities at B Resorts, we found the bed to be incredibly comfortable for a great night’s sleep.

In the bathroom, AVEDA toiletries were much appreciated.

A mini refrigerator (designated for beverages, only) is in the room, which is great for chilling water bottles.

Complimentary Wifi was FREE and super fast! It could handle constant photo uploads on my part to Instagram and Facebook, which is pretty great if you know anything about some hotel’s Wifi.

Beyond the room, the B Resort did not disappoint, either.

B Resort Restaurant at Disney Springs

First of all, their signature restaurant, American Q, is fabulous! (This restaurant is no longer at the B Resort. It is now known as American Kitchen Bar and Grill.)

I’ve had the Flatbed Buffet before, which is seriously massive and hearty with great southern-inspired foods, but this time we indulged in some a la carte options, such as the Q Burger and the Sliced Texas Bark Beef Brisket, as well as many of the cocktails (FYI – Happy Hour at American Q is a splendid deal! Craft cocktails that are super strong for just $5.50 from 4-7 p.m.).

There is also a quick service shop known as the Pickup which has ready to go snacks, breakfasts, etc. We had a quick breakfast there one morning.

I got a bacon and egg croissant and my husband got a HUGE chocolate chip muffin and the bill was just over $6. Truly remarkable on Disney property 🙂

Modern Art and Decor at B Resort and Spa Orlando

The lobby area is bright and spacious. There is a great “living room” full of funky colorful furniture and TVs, as well as the Moncierge, an interactive computer screen where you can check the weather, check in for your boarding pass, access information about area activities, etc.

Unique artwork is everywhere, and some is available for purchase (local artists provide the artwork which hangs on the walls so buying a piece will directly support a central Florida artist).

Let us not forget about the signature $15,000 Italian chair in the lobby. This Proust Geometica focal point seriously cost a pretty penny, and it’s a favorite for picture taking and selfies 🙂

We can’t forget the pool, though! The outdoor heated zero-entry pool is a hit among families, so much so that there are special rooms on the first floors that are outfitted with bunk beds and a bed for the adults.

The rooms have patios with patio furniture which open directly onto the pool area so that you don’t have to run through the lobby to get to the pool. Smart!

Other fun finds are the pool bar, gigantic chess set outdoors, communal seating areas under shade, and the B Indulged by AVEDA spa.

Looking for other Disney Springs hotel reviews? Check out our video room tours of the Hilton Orlando Buena Vista Palace and the Best Western Orlando.

You might also like our video room tour of the Walt Disney World Dolphin, which is close to Epcot but actually owned by Marriott.

And we stayed three weeks at Towneplace Suites by Marriott in Flamingo Crossings by Disney’s Animal Kingdom. It’s another great hotel that is cheaper than Disney prices. 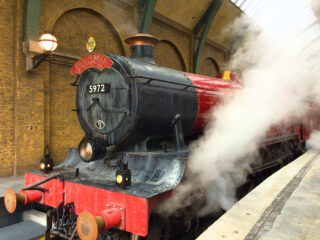 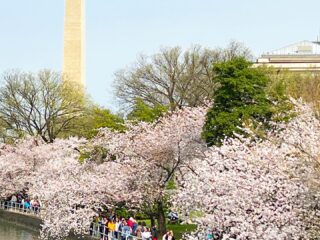 I was so very happy whis hotel. They upgraded our room at check in and our 9 day stay with them was wonderful. Could not ask for anything better for the very reasonable price we paid. Would love to stay there again!

It's truly a shame the place has gone downhill since your visit. We recently stayed there for the first time and it was the stay from hell. From checkin to checkout it was awful. The reviews on TripAdvisor and elsewhere reflect a more accurate picture of what it's really like to stay there. Oh, and it's not really a Disney property because you don't get the same perks as you would at a REAL Disney property.

Sorry you had a bad experience. Disney officially certifies certain resort properties in Disney Springs, so it is a real Disney property by their official standards. If they didn't bestow the certification to the property, they wouldn't be able to call themselves an official partner.

This is honestly the best review for this hotel I have seen. Now when I see specials for them I won't be nervous about staying there.. just not thrilled about the parking fee, but for such a nice place, it would be doable.