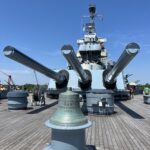 Battleship North Carolina is one of the most popular and biggest attractions in Wilmington, NC. A visit to the most decorated and longest-serving battleship of World War II is a must. This unusual tourist destination does have a few unique things you need to know to enjoy your tour, though.

Our Essential Guide for Visiting USS Battleship North Carolina helps you get the most out of your stay while avoiding some common problems with touring a historic battleship.

As of July 2022, part of the USS Battleship NC is under repair and some areas are unavailable to guests. Completion of the repairs are expected to be by end of 2022. We visited during the maintenance and were not inconvenienced in any way during our tour. We still found plenty of interesting exhibits to enjoy and stayed at least three hours.

Be sure to see our entire list of the Best Things to Do in Wilmington, along with a helpful map to plan your itinerary.

Our guide to the Best Breweries in Wilmington will help you decide where to eat and drink after exploring the city.

The USS Battleship NC is just one of many ships named NORTH CAROLINA. It is nicknamed The Showboat.

The battleship in Wilmington was launched on June 13, 1940, after her keel was laid in New York on October 27, 1937, and was commissioned on April 9, 1941. During World War II, the Battleship North Carolina participated in every major naval offensive in the Pacific area of operations. She earned 15 battle stars and was the most decorated U.S. battleship of WWII.

No vessel in America’s World War II Battleship Fleet served as long in combat or with greater distinction than the USS North Carolina, from Guadalcanal to Tokyo Bay. The whole nation is proud of her.

In September 1942, a Japanese torpedo hit the Battleship’s hull, but she continued to sail and kept up with the rest of the fleet.

The section of the ship that was hit by the torpedo is off-limits during the regular self-guided tours, but is often a part of haunted ghost tours on the ship overnight. Men died in this area during the attack, and the location is said to be haunted. Occasionally, paranormal research events are conducted, so be sure to look for special events, such as those being held in August and October 2022.

A crew of 144 commissioned officers and 2,195 enlisted men lived and worked onboard. Learn more about the men, and hear their personal stories about time on the ship, though Sea Stories.

The USS Battleship North Carolina was decommissioned in 1947, and in 1961 was destined for the scrap heap before North Carolina citizens fought to save her. The public raised $330,000 to buy the ship from the federal government.

On April 29, 1962, the memorial was dedicated to World War II veterans and the 11,000 North Carolinians who died during the war.

How Long Does It Take to Tour Battleship North Carolina?

Two hours is the average visit time, however there is so much to see you can spend a lot longer. We spent over three hours on the ship and still didn’t see everything. And that was when part of the ship was closed due to maintenance.

What we loved about the self-guided tour of The Showboat is the stories shared by the actual servicemen who worked on and lived on the ship. You can read their stories and see their pictures in every room below decks. If you stop and read these personal tales of what life is really like while fighting in war, you will quickly appreciate the sacrifices that the men and their families made.

Be sure to take time to read at least a few of the reminiscences. It is well worth the time and gives the floating city a more personal touch, amidst the sea of steel grates; tiny, hot rooms and unfathomable wartime efforts that took place on the battleship.

Are There Guided Tours?

Yes, there are guided tours provided by the Friends of the Battleship North Carolina. However, you must schedule your tour at least 36 hours in advance. You cannot book a tour on the day of your visit.

There are several guided tours, including:

Can I Bring Food or Drinks On The Battleship?

Yes, you can bring drinks or snacks. In fact, we highly suggest you bring your own drinks because it can get very hot on the ship during the summer months.

There are drink and snack vending machines onboard the ship in one location. As well as in the waiting room at the exit of the tour.

Picnic tables and areas are available in the park surrounding the battleship, as well.

Are There Restrooms on the Ship?

We did see a couple restrooms on the ship, however they were pretty old (part of the ship’s historic structure) and not really centrally located.

There are plenty of restrooms in the Visitor Center.

Can I Buy Tickets Online?

No, not at this time. There are no advance ticket reservations, either.

The cost of admission varies depending on age and military service. The maximum price per ticket is $14 for adults age 12 or over, with a variety of discounts, including:

The battleship is open from 8 a.m. to 5 p.m. every day of the year. On Christmas, the battleship opens at 12 noon.

Ticket sales end at 4 p.m. , one hour before closing.

Where is the Battleship North Carolina Located?

While the ship can easily be seen from downtown Wilmington, you cannot walk to the ship. However, you could take a water taxi from downtown to the ship if you don’t have a car or don’t want to move your car from where it is parked. Bizzy Bee Water Taxi departs from the Battleship every 30 minutes.

Yes, parking is free for the Battleship North Carolina.

In fact, you can park at the Battleship and not even pay for entrance to the self-guided tour. There is a park surrounding the ship that is great for nature walks, picnics and great views of downtown Wilmington from the other side of the Cape Fear River.

The parking lot is relatively big. While there is no designated RV parking, chances are you can park horizontally across the spaces in the outer rows of the parking area. There seemed to be plenty of space, so even on busy days you will likely not have a problem parking your rig.

Is the Battleship Accessible?

Portions of the Battleship NC are accessible. However, because this is a preserved wartime vessel, there is limited (almost none) accessibility below decks.

Stairs are narrow and steep, just like what the sailors would have used. There are multiple levels of the ship to explore. On each level, there is signs showing how to exit to wait for other members of your party if needed.

In the Visitor Center building, there is a large, air-conditioned waiting room where those who are unable to navigate the stairs can wait.

ADA admission tickets are discounted. Those who need assistance can have one free adult admission with their ticket purchase.

Is A Visit to the Battleship Good with Kids?

It depends on the age of your children and their temperament as to whether or not a visit to the battleship will be good or too challenging for enjoyment.

There are plenty of things that kids will enjoy. They can explore the upper decks that are full of heavy machinery and artillery. There is a place where they can climb up into a turret and see what it was like.

In the lower decks, kids will love dropping money into the Wishing Well. There is a bucket several decks below, and the challenge is to drop coins or bills into the bucket, and not the floor around it.

However, all of the battleship has original stairs used in World War II. The stairs can be steep and narrow, and it can be very difficult to hold onto a baby or a toddler in your arms while trying to navigate towards a lower level.

Strollers can be used on the upper deck, however it would not be wise to use a stroller in the working and living quarters in the decks below.

Can I Fly a Drone Over the USS Battleship North Carolina?

Yes, flying a drone is allowed over the battleship as long as state and federal drone laws are followed and you are not endangering others or the property. Launching and landing a drone can only be done from the surrounding park, though, not from the decks of the ship.

The gift shop at Battleship North Carolina is huge and has a wide variety of items to buy as a souvenir. Purchasing items at the gift shop is one of the main ways to support the preservation of the battleship.

Among the most unique items to buy are Battleship Knives made from steel from the hull and teak that come directly off of the USS Battleship NC.

Metal from the battleship is also used to make unique signs with nautical shapes that are a visible reminder of the battleship’s history.

These items can be bought in the gift shop, or online via BattleStarCollection.com. See more about these unique souvenirs in the video below:

A commemorative flag flown from the main mast of the Battleship NORTH CAROLINA is also available to purchase. This is a great idea for a birthday, anniversary or enlistment gift. The flags can be purchased and then will be mailed to you after they have been flown, along with a signed Certificate of Presentation from the Director of the Battleship Memorial.

The USS Battleship North Carolina memorial is close to the crossroads of highways, as well as across the Cape Fear river from downtown Wilmington. There are plenty of hotels nearby, including:

For a beachfront hotel with ocean views, consider staying at the Blockade Runner Resort in nearby Wrightsville Beach.

The Battleship Half Marathon is among the oldest half marathon races in the south. In November, a half marathon, 10k and 5k are held through the streets of downtown Wilmington, with views of the Battleship NC in the distance. Show your race bib for free admission to the battleship.

A visit to the USS Battleship North Carolina is so important in today’s modern age. Exploring the ship and what life was like for the sailors and servicemen during World War II puts into perspective the sacrifices the men made to fight for freedom. It is memorials like these that keep history alive and help us not to forget what previous generations have done for our continued liberty.