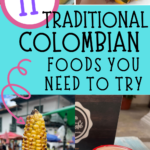 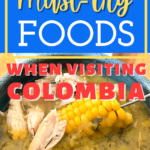 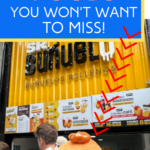 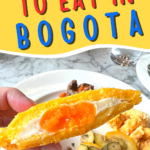 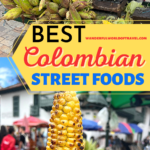 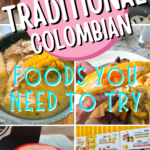 An important part of learning more about a country’s culture is enjoying the typical foods. If you are visiting Bogota, Cartagena or Medellin, you won’t be disappointed in the culinary history of these popular cities!

These are the best traditional Colombian foods that you must try during a visit to the South American country. The popular snacks, entrees and drinks are usually enjoyed as street foods, or can be found in casual cafes and restaurants.

Be sure to see our must-see list of the 10 Best Things to Do in Bogota, too!

This hearty, thick soup is warm and comforting. Made with three types of potatoes, as well as herbs, this is the type of soup that you dream of eating on a cold winter’s day in front of a fire.

Though well known in Colombia, Ajiaco is actually most widely celebrated in the capital city of Bogota.

Your steaming bowl of soup will be served with a piece of corn on the cob placed in the bowl on top of the soup. You will also get a plate with a slice of avocado and a serving of white rice. Cream and capers are generally served as accompaniments, too. All of the toppings work together to create a delicious meal that you will want to try to recreate at home!

In Bogota, I found that the most delicious ajjiaco I had was from La Puerta de la Catedral restaurant, which is located near the Botero museum in the La Candelaria district. The cost for a huge bowl of the soup, which was more than I could eat in one meal, was around $8 USD.

This traditional Colombian food (also popular in Venezuela) is made with ground corn dough. Resembling a very thick pancake, arepas can be stuffed with a filling or served simply on their own.

You will find arepas throughout Colombia. They are very inexpensive and will differ in flavor depending on where you purchase them from.

I particularly like arepas con huevos, which is a fried egg surrounded by the corn dough. It is a very satisfying breakfast item!

Empanadas are pastry turnovers that are stuffed with savory – not sweet – ingredients such as beef. Empanadas can either be baked or fried.

These easy street foods can be found everywhere in Colombia. In fact, we always found them on our breakfast buffet at the Hilton Bogota Corferias.

Among the cheapest foods that you can find in Colombia, empanadas make a quick, easy and filling meal.

These fried balls of dough are covered in cinnamon sugar. They can be served with either sweet or savory fillings.

Bunuelos are most often made with cassava flour and cornstarch.

In Bogota, we had Bunuelos stuffed with sweet fillings. I chose the dulce de leche filling (called arequipe) and the caramel with hot dough was so delicious!

The street corn in Colombia had huge kernels on each cob. The kernels are juicy and not dry. Even the color and taste are dramatically different.

Even if you have never liked corn on the cob before, give Colombia’s version a try.

Crushing sugarcane to get a sweet liquid, then combining it with fresh-squeezed lime juice, is simplicity in its magic.

Combine the two ingredients over ice and you get a delightfully refreshing beverage.

The street-theater of crushing the sugarcane on small carts is part of the allure of this drink.

Obleas are a dessert that is often found in Spanish and Latin American countries. Two round wafers, which resemble large communion wafers, are combined with a filling to make a handheld treat that is easy to eat.

Fillings are usually sweet, however they can be savory as well, or a combination. For instance, sweet dulce de leche (known as arequipe in Colombia) and cheese crumbles are a common filling.

A traditional Colombian drink, this fermented beverage is made from corn.

Fermentation used to start with the saliva, when this beverage was first enjoyed by indigenous communities. Today, the fermentation is made with pineapple.

Chicha is similar to kombucha, but more alcoholic.

After trying chicha, it’s hard to describe the taste. It is unique unto itself. I didn’t hate it, but I couldn’t imagine drinking a large glass of it!

Colombia is well known for its coffee production, specifically arabica beans. If you are a coffee lover, there is no way that you can miss the special opportunity of sipping a hot steaming cup of Java in the country that grew the beans.

While there are more than enough places to get a great cup of coffee, we especially liked Arte Y Pasion Cafe in Bogota.

This barista school improves the lives of coffee farmers by paying a fair price for the beans directly from the growers.

The cafe does not have a specific brand that they promote. Instead, they are training their employees the craft of serving up the best coffee grown in the county. A variety of blends and brands are available to enjoy in the cafe, or purchase to bring home.

Aguardiente is also known as firewater.

Not all versions of aguardiente taste the same. And different varieties are actually prohibited from being transported from region to region.

While aguardiente is most often enjoyed straight, it can be part of cocktails, as well.

Related Post: Our Favorite Hotel at the Bogota Airport

If you really want to say that you have tried authentic Colombian foods, then buy a bag of big ass ants!

Though this seems like a tourist gimmick, these ant snacks are actually consumed by Colombians in many parts of the country.

The ants are a variety that have extremely large bottoms. Hence the name big ass ants.

Why eat the insects? These protein-packed snacks are said to be salty and crispy, just like potato chips. But with an added benefit – they are thought to work as an aphrodisiac!

While you can certainly find all of these popular Colombian street foods in most restaurants and street vendor carts, one of the easiest ways to enjoy the very best typical foods is through a Colombian food tour.

We signed up for the popular food tour through Beyond Colombia, which is a tourist organization offering free walking tours to share the culture of the country.

Our Beyond Colombia tour brought us to 9 different locations to enjoy the best of traditional Colombian foods. The free tour allows you to pay for the foods of your choosing. Even if you chose to enjoy all of the street foods, the cost would just be 36,000 Colombian pesos (around $9 USD).

We enjoyed the tour in Bogota. Tours are also available in Cartagena and Medellin.