Downton Abbey Exhibit Biltmore is perhaps one of the most highly anticipated events at the Biltmore Estate in Asheville, North Carolina. If you’re thinking of visiting the Biltmore Downtown Abbey exhibit, here’s everything to know! 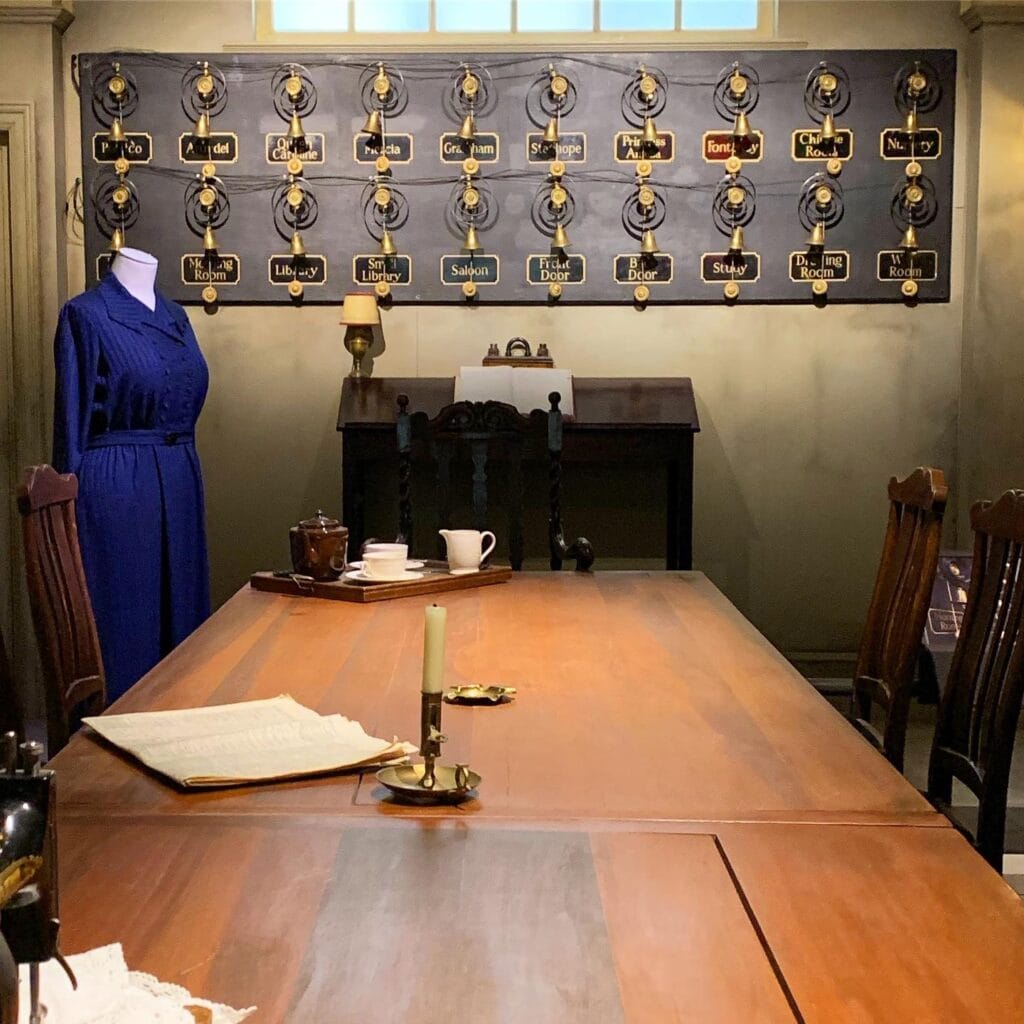 Downton Abbey: The Exhibition is a limited time exhibit at the Biltmore Estate in Asheville, NC.

(Similar to another limited time engagement at the Biltmore Estate – Chihuly at Biltmore. Check out our colorful photos from that memorable exhibition.)

The Biltmore Downton Abbey Exhibition showcases the hit television series that became a feature film in 2019. You will enjoy never-before seen interactive elements that bring the story to life through the characters, props, fashions and locations. 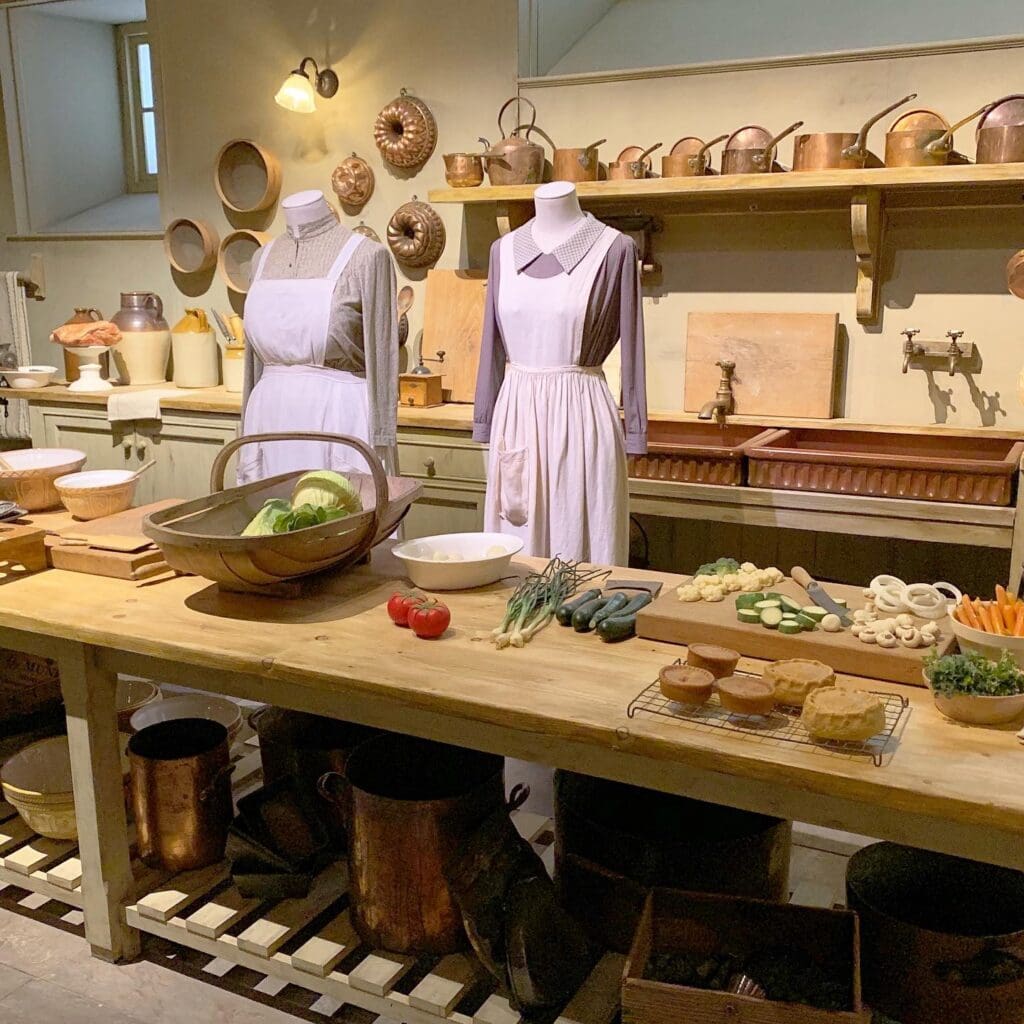 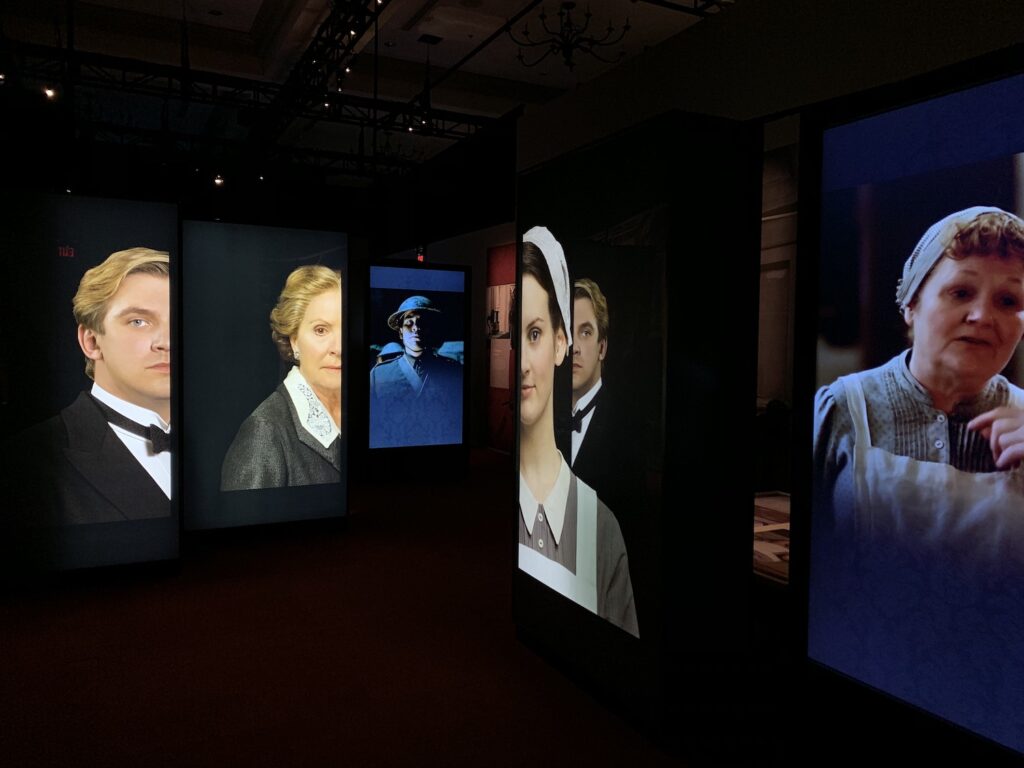 This Downton Abbey Exhibition is one that has been traveling across the country. In fact, our mom and aunt saw the exhibition in West Palm Beach, Florida, and shared with us how the Asheville exhibit was slightly different than the touring exhibit when in Florida.

For instance, mom said the Florida exhibit was a lot less intimate. You couldn’t get as close to the props and costumes as you can at Biltmore Estate.

Other touring locations of the Downtown Abbey Exhibition are often housed in one location. Downton Abbey Exhibit Biltmore Estate is housed in two different locations (The locations must be driven to, they are not walkable. However, there are free shuttle buses):

The Vanderbilt family were pillars of American society. And they had a staff taking care of their every need, too, just like in Downton Abbey. 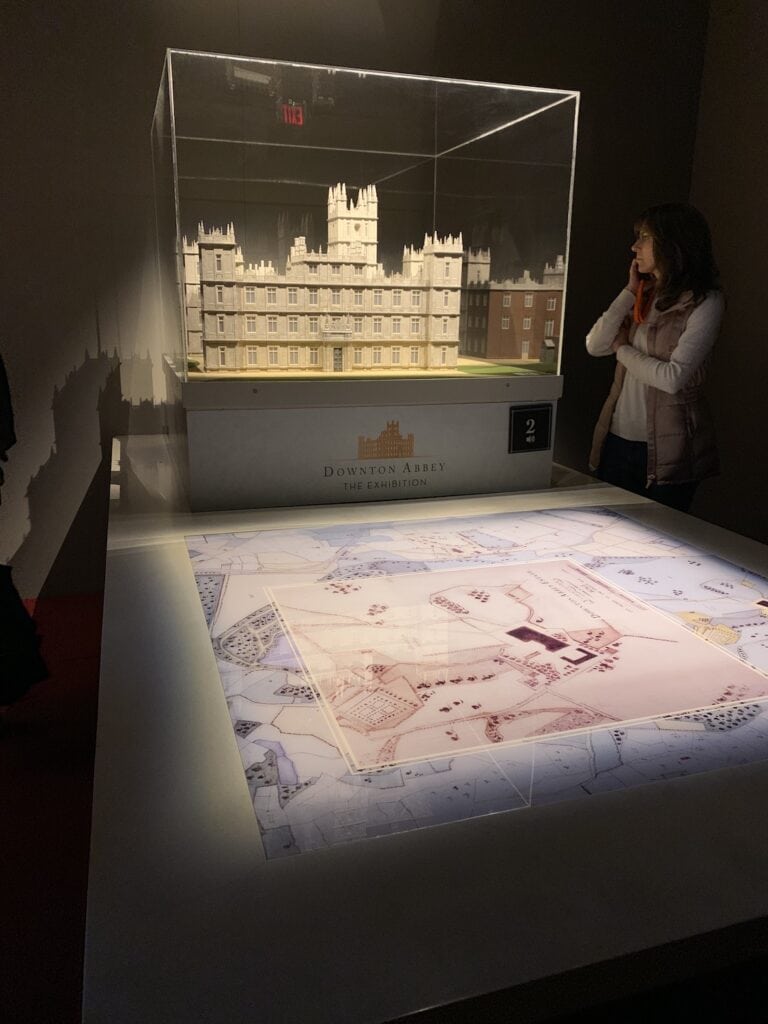 Part of the tour at Biltmore House is “downstairs” where the servants would have been busy cooking, cleaning, living and behaving just like the servants in Downton Abbey.

While filmed in two different countries, the lifestyle was very similar. And the houses (both Biltmore Estate and Highclere Castle, where Downton Abbey is filmed) are both grand estates that were actually lived in.

Admission to Downton Abbey: The Exhibition is different depending on how you enter the Biltmore Estate.

Do You Need a Reservation for Biltmore Downton Abbey Exhibit?

No, there is no need for a reservation.

However, you may need to wait longer on busy days.

From our personal experience, longer wait times are during the middle of the day, especially early afternoon. This is when a lot of tour groups are visiting the exhibit. 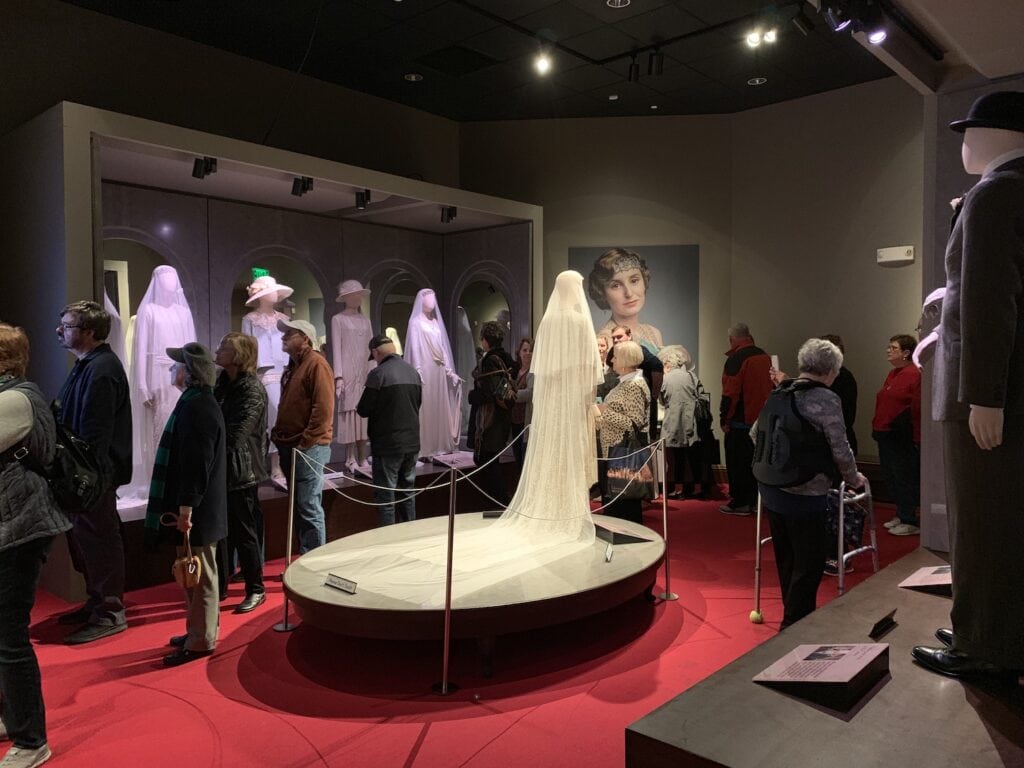 Consider arriving earlier in the morning or later in the day.

Hours (which are subject to change, so be sure to check the Biltmore Estate website) are: 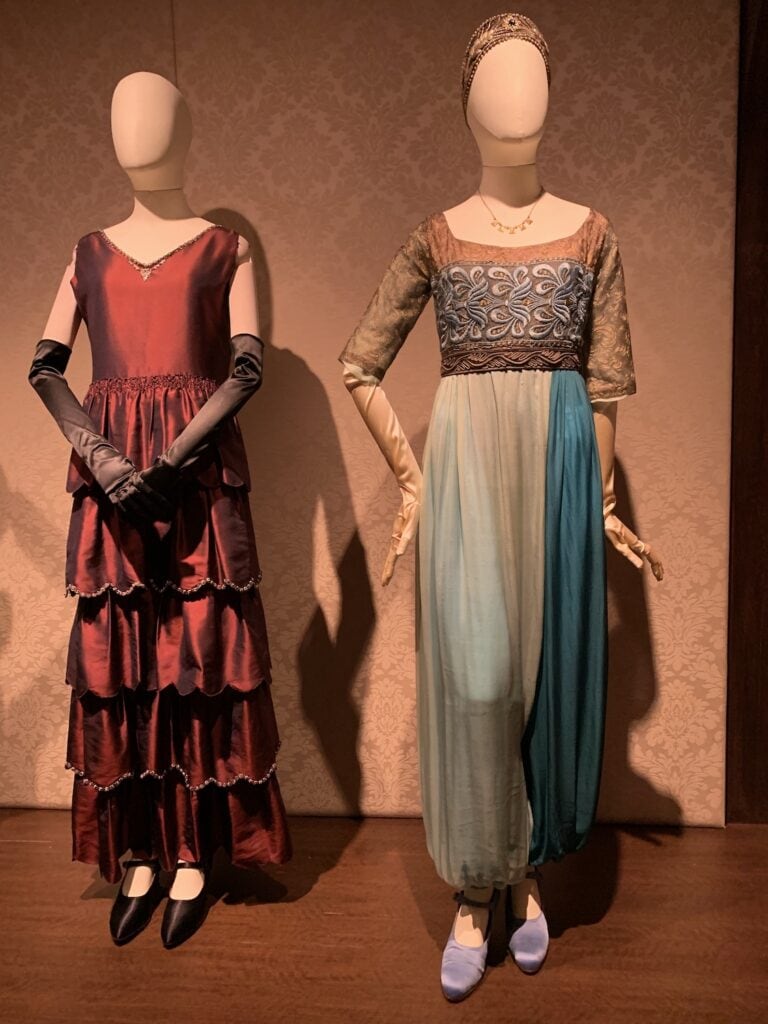 It was actually remarkable how close you could get to the historic and iconic costumes that were worn in the TV show and the movie. The attention to detail is astounding.

If you are a true fan of Downton Abbey, you will remember many of the Downton Abbey Clothes at Biltmore. They are from some of the most memorable scenes in the television series.

The Downton Costumes at Biltmore are located in an intimate area in Antler Hill Village. You can shop, eat and dine at the small village square. Next door, the Biltmore Estate Winery is open for free tours and tastings.

You really could make a long afternoon enjoying the Downton Abbey costumes, trying amazing wines, and shopping in unique stores. That’s before you sit back and relax on the village green and maybe listen to some live music if it’s playing that day.

We liked the exhibition. It definitely was interesting to see the props and costume from the television show in person. And the chance to do it close to home was amazing!

The crowds were pretty bad when we went to the exhibit in the Deerpark. It was about 1-2 p.m. and the number of tour buses was pretty big. However, keep in mind, this was during the Christmas season when crowds typically do get big.

I would suggest going to the Downtown Abbey exhibit early in the morning or towards closing. It seems that most tour groups probably follow the same timeline, which I’m guessing is:

If you can visit the Downton Abbey exhibit when tour groups are not likely to be there (such as mid to late afternoon), chances are you’ll have much less crowds. Because it was very difficult to read any of the plaques with so many people milling around.

Nothing says you have to visit the Biltmore House first during your visit to the Biltmore Estate! It’s not mandatory!

The Downtown Abbey Exhibition was really well done. I especially loved the film narrated by Carson at the beginning and the end of the exhibition.

Also, the interactive quiz where you can see what kind of Downton Abbey servant you’d be was pretty interesting. Here’s a few screenshots of when I took the quiz: 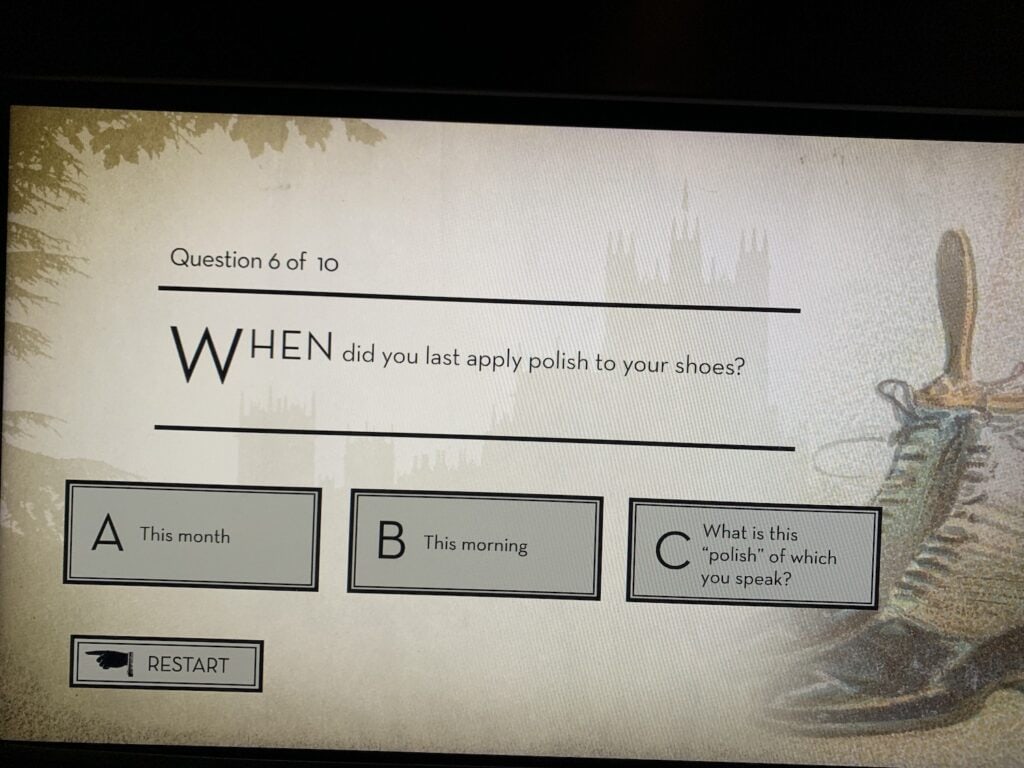 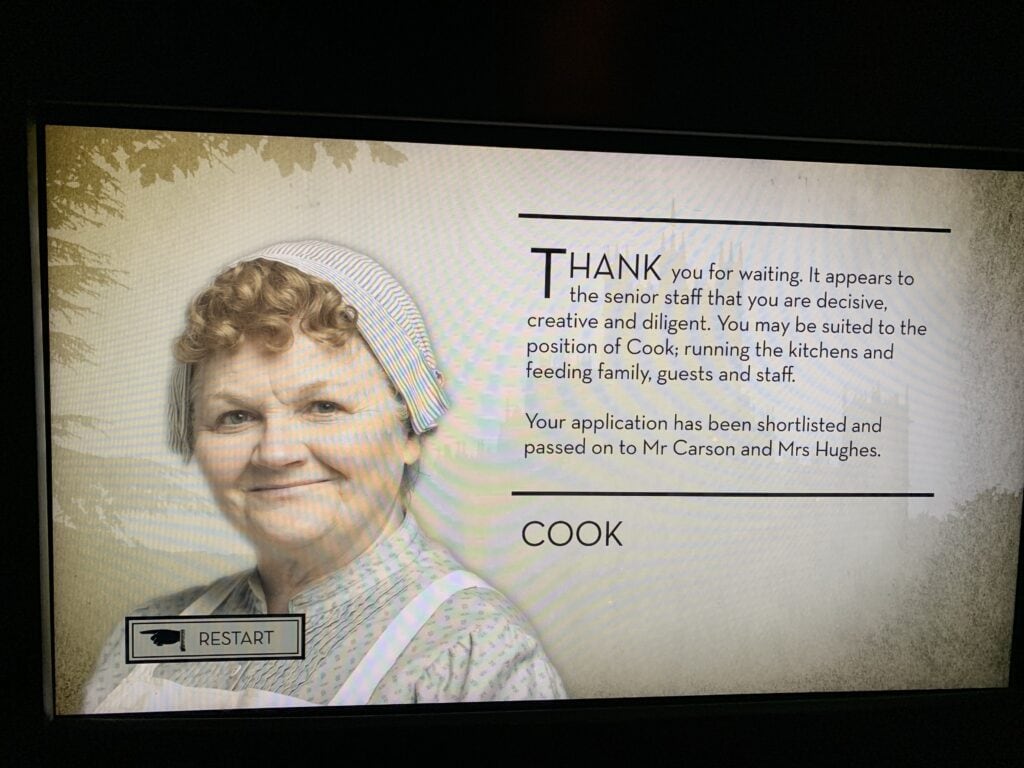 Keep in mind that you DON’T need to be a fan of the show – or even have seen the show – to like or appreciate the Downton Abbey Exhibit at Biltmore Estate.

In fact, I found the exhibit to be very general and broad as a dedicated viewer of the show. There’s not too much hidden secrets to be found while exploring the props and costumes. What there is to enjoy is an appreciation of the details of the sets and props. As well as a love of the period costumes and fashions that were so painstakingly brought to life. 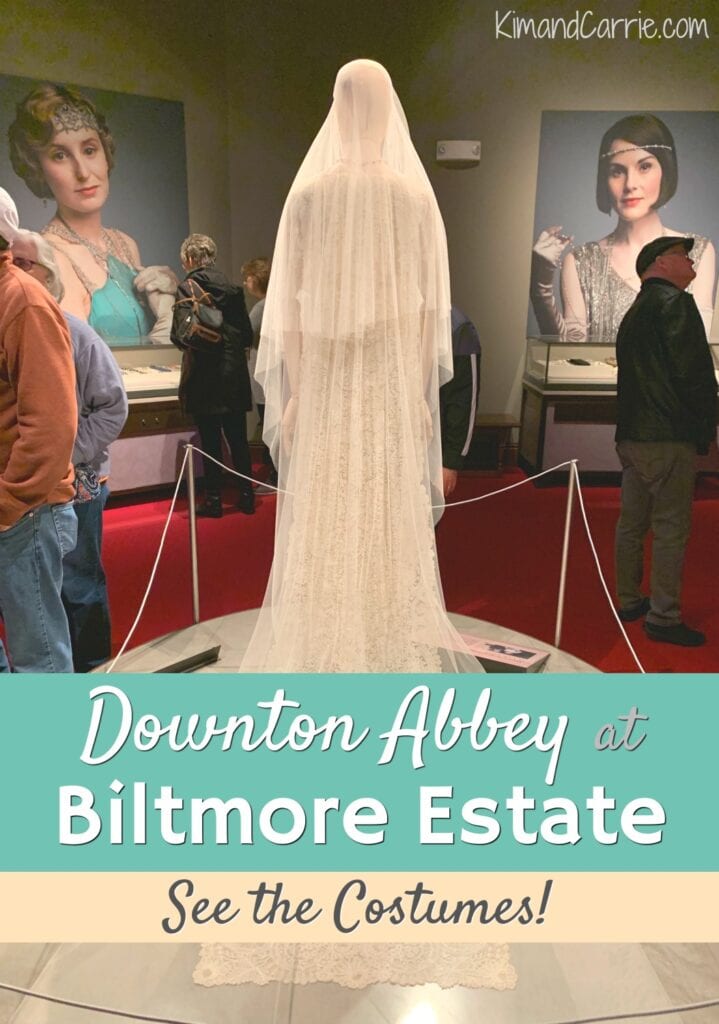 Of course, there is a gift shop at the exit of the Deerpark exhibit. It was a lot of fun to see the unique gifts and souvenirs they have for Downton Abbey that can’t be found in most other stores, so be sure to leave time to shop!