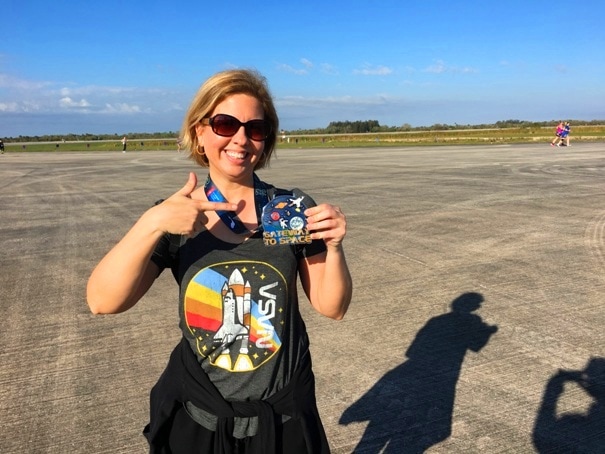 Gateway to Space 5K and 10K

Gateway to Space 5K and 10K is held once a year. This year is was held March 11, 2018. The race for charity (American Cancer Society) is held on the actual space shuttle runway, known as the Space Shuttle Landing Facility.

The opportunity to run or walk on the space shuttle runway is absolutely awesome for anyone who loves the space program. This rare event is definitely something to be on a space lover’s bucket list. 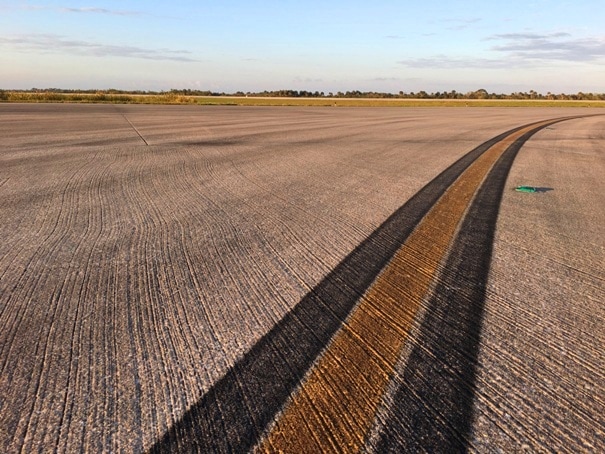 While commercial businesses have been using the space shuttle landing strip since the space shuttle program ended (see more info below), the general public does not usually get a chance to visit the historic site. There is no tour to sign up for that will take you to the Shuttle Landing Facility to walk on the runway.

So the Gateway to Space 5K/10K is the best way to guarantee a visit to the old space shuttle landing strip. 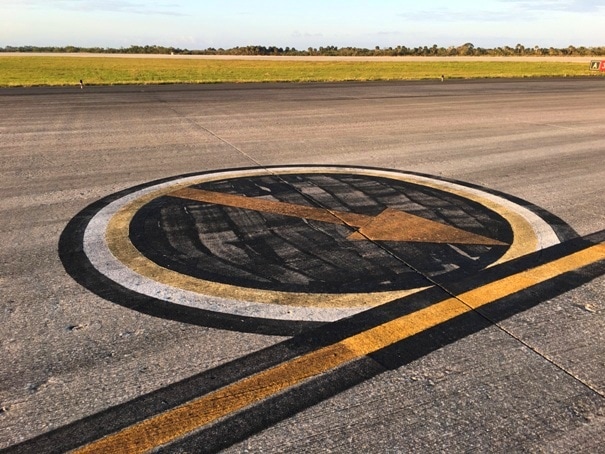 I only knew about this race because I saw someone post about it after the first race in 2017. So I constantly checked to see when the next race would be. The 2018 Gateway to Space wasn’t announced until late January 2018.

The only way I found out was by following the Gateway to Space 5k Facebook page, then turning on notifications for the page. That is how I knew that registration was open. (REGISTRATION IS NOW OPEN FOR 2019! THE DATE IS FEBRUARY 3, 2019.)

Running a Race on the Space Shuttle Runway

And I’m not a runner, either. 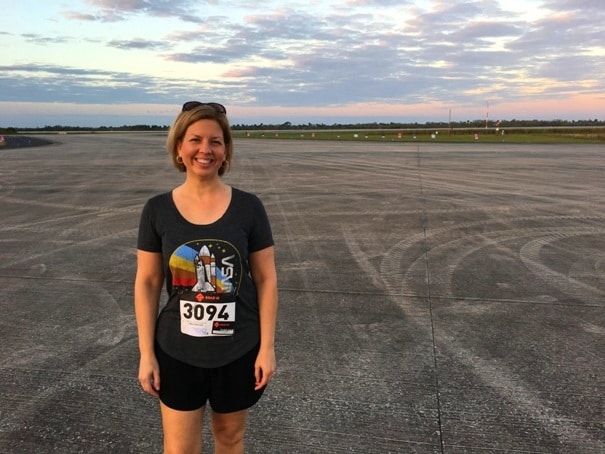 So I was a little apprehensive about signing up for a 5K. But it was on the NASA space shuttle runway, so how could I not?

Turns out, I wasn’t the only one with the same plans.

There were lots of people signed up for the race that had no intention of running at all. People who couldn’t walk well and used walking sticks. People in jeans with cameras. About 75% of the people there were dressed like they were ready for a race, but a lot of people that paid the entrance fee did it for the chance to step on a historic site at NASA. 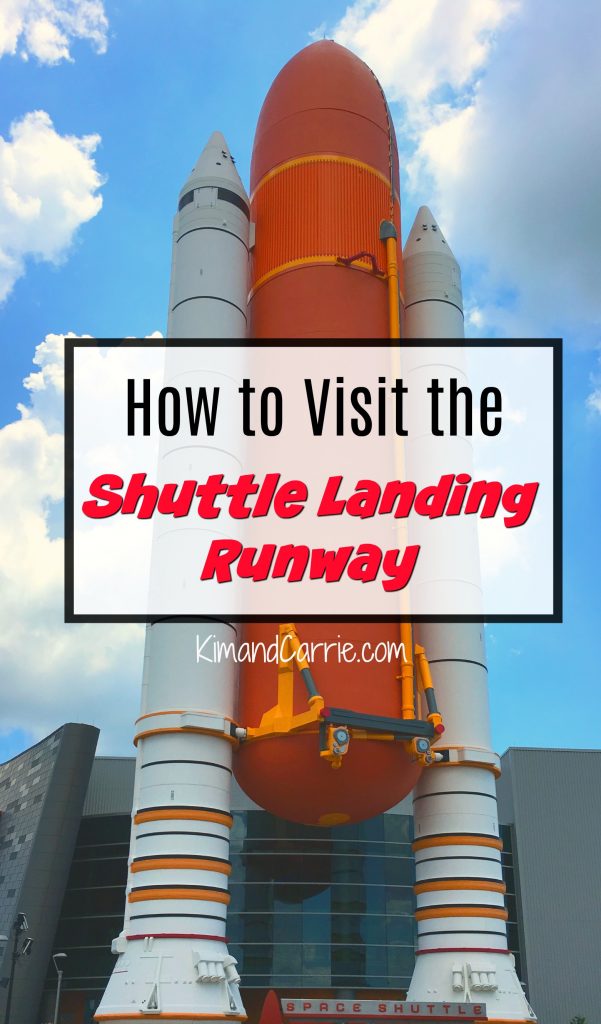 We arrived at Kennedy Space Center the morning of the race at 6 a.m. I recommend staying in the area, we like the Holiday Inn Titusville.

We picked up our registration number outside of Kennedy Space Center’s main gate, and then went inside to board KSC buses to be driven to the Shuttle Landing Facility. 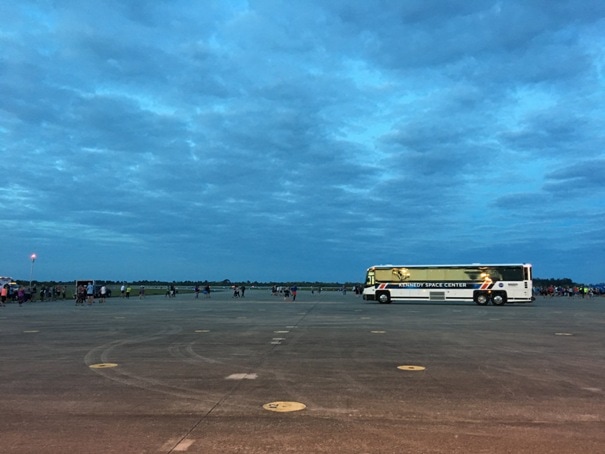 The race started at 8 a.m. We were at the Shuttle Landing Facility in the dark for a while, but when the sun did rise, it was a gorgeous site to be on the space shuttle runway with the early morning light. And jets on the runways. 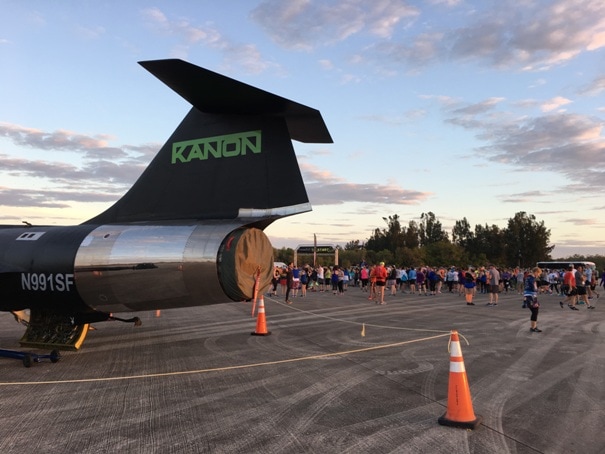 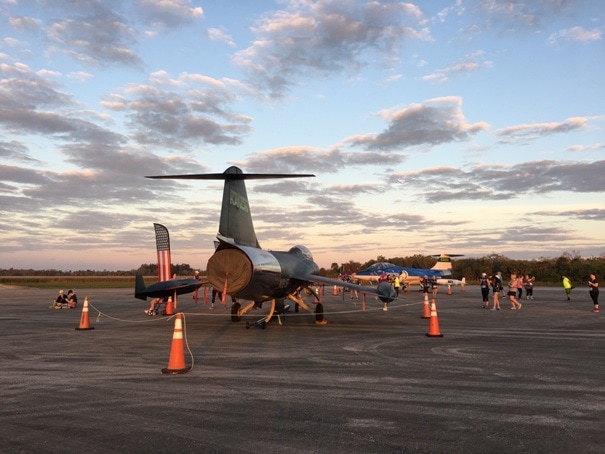 While waiting, there were a few vendors to talk to, as well as a line of porta potties. We got our t-shirts before the race in case they ran out after the race.

The entire Gateway to Space race was very well organized and low-key. No drama or rushing. The amount of people was not too big, and everyone really felt welcome, regardless of why you were there. 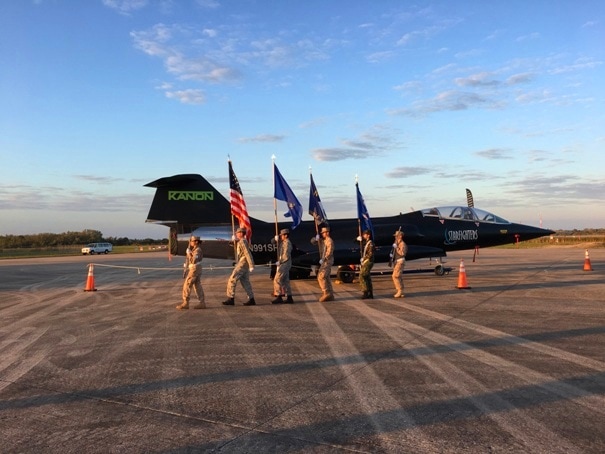 We said the Pledge of Allegiance, the JROTC presented the flags, and then the race started.

While others started running or walking with a fast pace, we kind of hung out at the back (simply because we were walking normally). We were always second from the last out of everyone running the races. 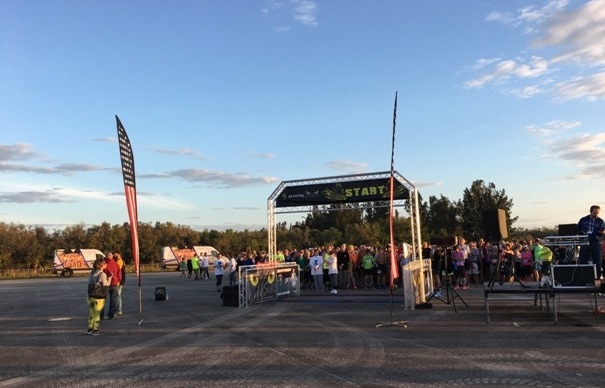 Soon after we started there was a turn of the runway to the long, straight stretch of the landing strip. At that turn, you could see the Vehicle Assembly Building (VAB) and the mobile rocket launch tower off in the distance as the sun rose into the sky. Lots of people stopped and took pictures. 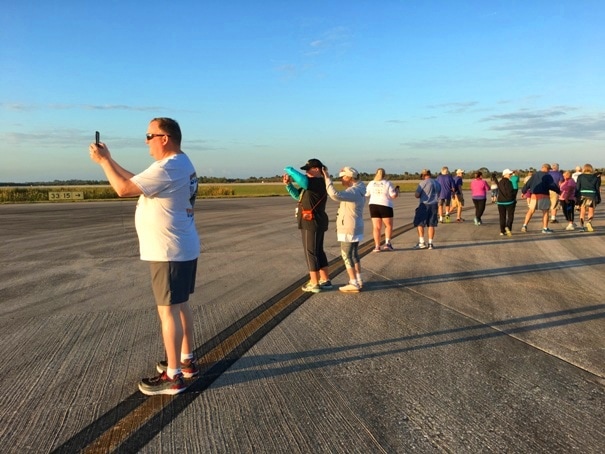 There were plenty of picture spots on the NASA space shuttle landing runway. Usually there was a line for the plaques (see below). So people were definitely here to take photos. 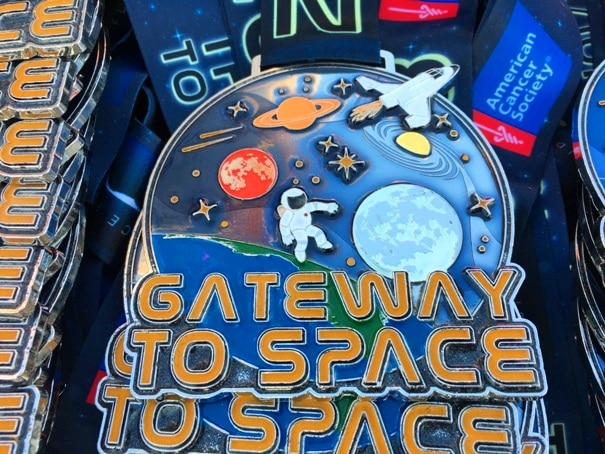 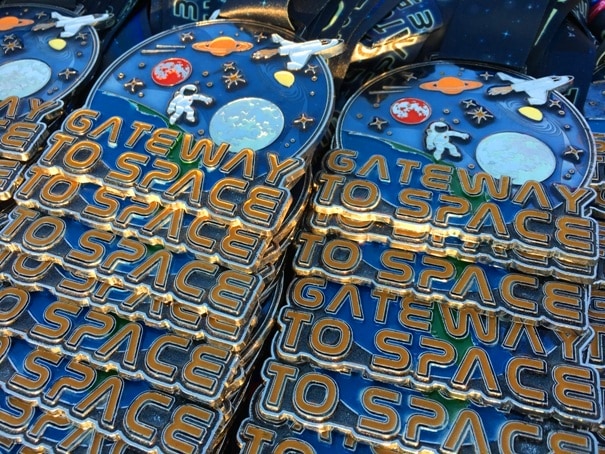 The runners that did run to win posted their times, and then walked back down the runway afterwards with their medals to take photos. I thought that was a great idea and speaks to the unique location. 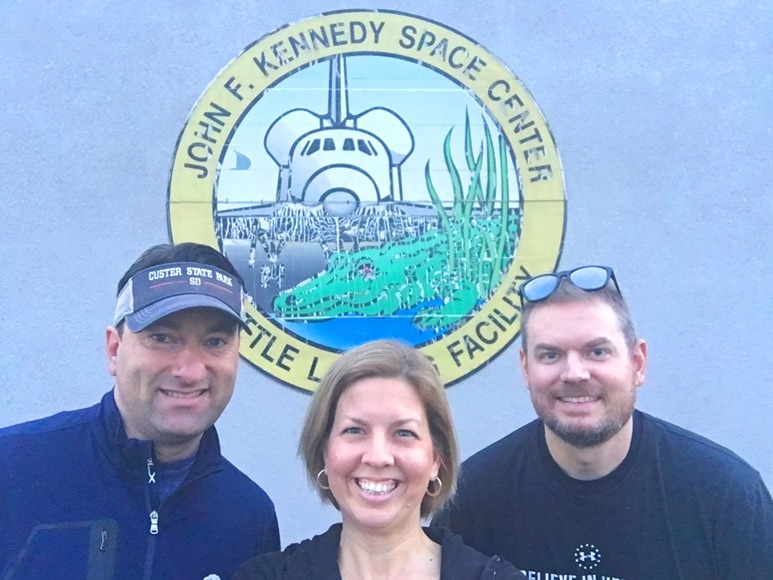 I brought a selfie stick to take pictures of my husband, cousin and myself together during the race. Turns out is was a great idea! And a lot of other people walked by saying that they wish they had one. So keep that in mind whether you are running or walking individually or as a group.

The most famous of all of the historic markers on the Shuttle Landing Facility is the final “wheels stop” mark for the last space shuttle to ever land, Atlantis. 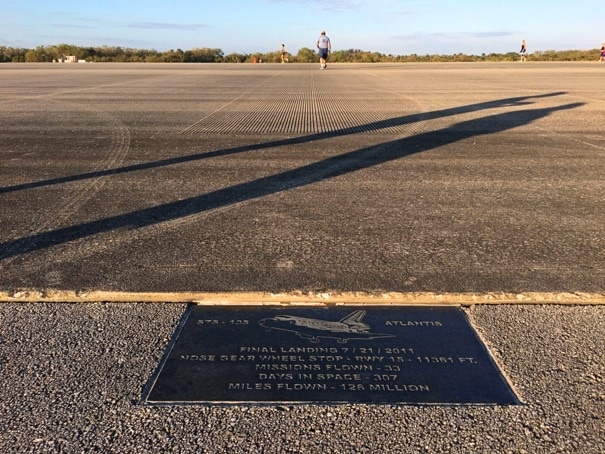 This was the first plaque that we came to, and there was a line to take pictures of it. 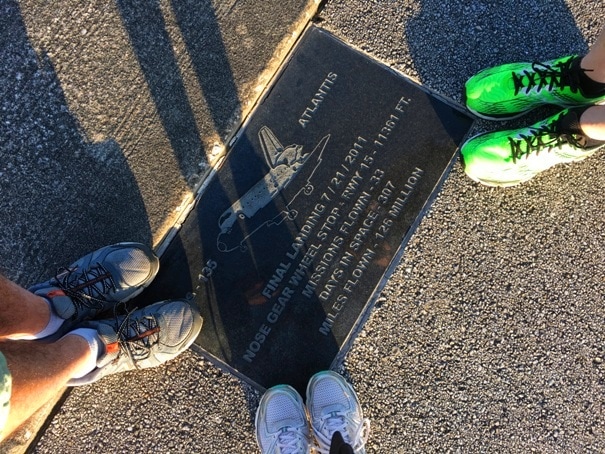 There is an elaborate plaque on the ground on the edge of the space shuttle landing strip.

In the middle of the space shuttle landing strip, there is the same spot marked with engraving into the runway. 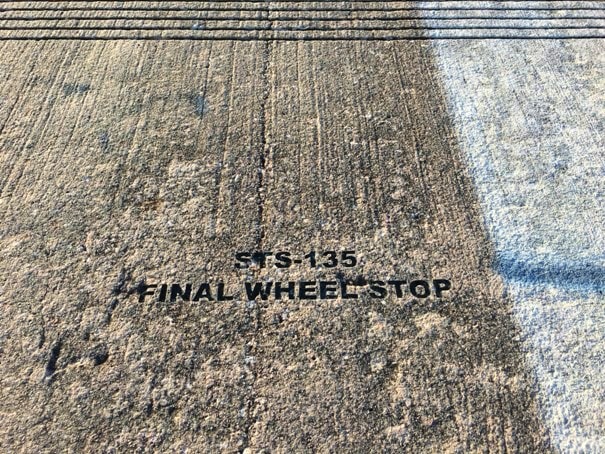 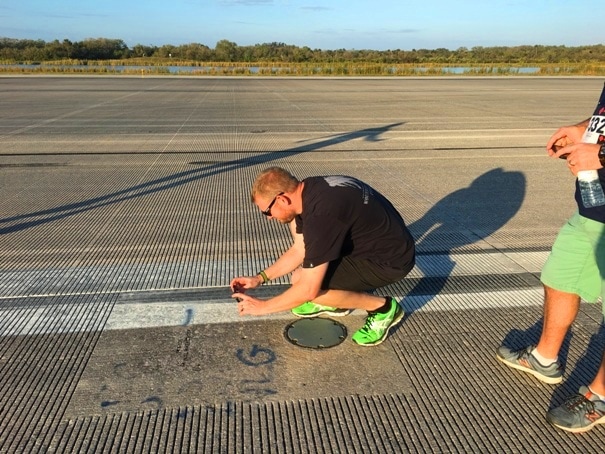 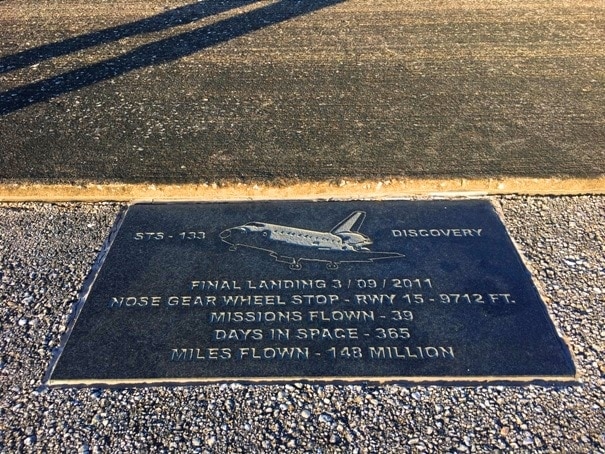 And there is a plaque for Endeavour’s final wheels stop. 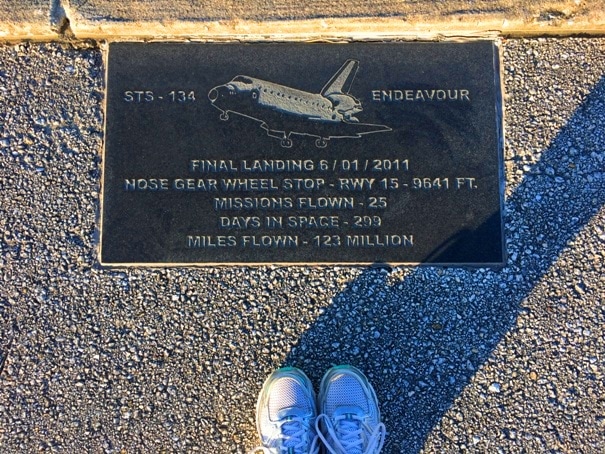 The view of the Vehicle Assembly Building and mobile rocket launch tower was also a place to take pictures either starting or ending the race. 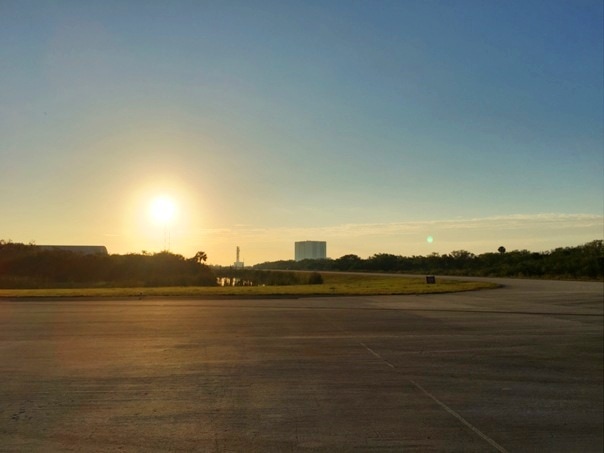 The NASA Shuttle Landing Facility Control Tower was located at the turnaround point for the 5K race. There is a space shuttle mockup in the distance nearby the tower. 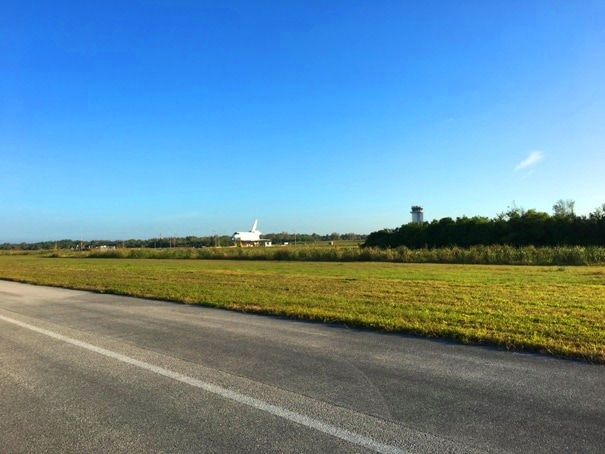 I only walked the 5K part of the race. Which means I walked half of the Shuttle Landing Facility. For those doing the 10K, they would have kept on going and been on the rest of the space shuttle landing strip. I do not know what is down the rest of the runway. 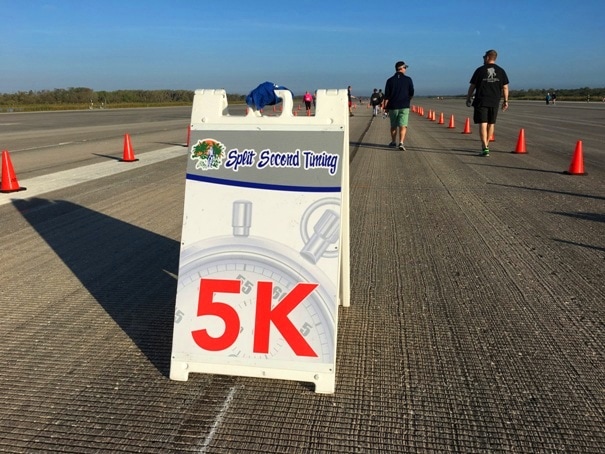 There is, apparently, a moon rock garden at the end of the space shuttle runway, according to Gateway to Space’s Instagram feed.

Back at the staging area for the Gateway to Space 5K and 10K, the official building for the Shuttle Landing Facility has a cool old sign on the side of the building to take pictures with. 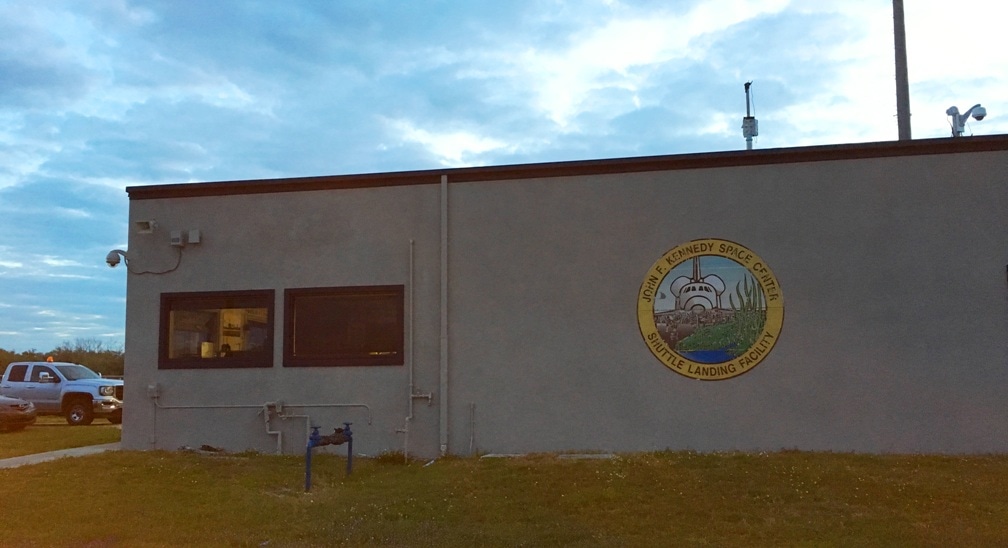 Interested in visiting Kennedy Space Center in Florida and seeing NASA history any time of the year?

If you need transportation from Miami or the Orlando airport to see Kennedy Space Center, there are lots of great options for transportation, as well as ticket packages and day tickets to see NASA.

Even though the space shuttle no longer takes off into space, that doesn’t mean that NASA’s space shuttle landing strip is falling apart. 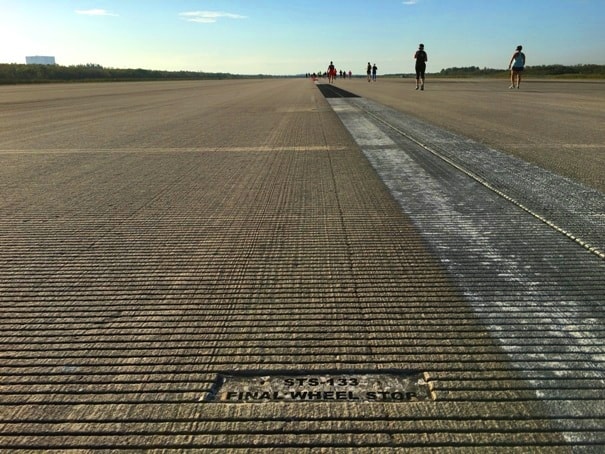 In 2015, NASA signed a 30 year agreement with Space Florida (one of the sponsors of Gateway to Space 5K and 10K) to manage the old landing strip. Space Florida will use the runway as a commercial facility. Which means that other spacecraft could soon be using the runway for different types of launches into space. 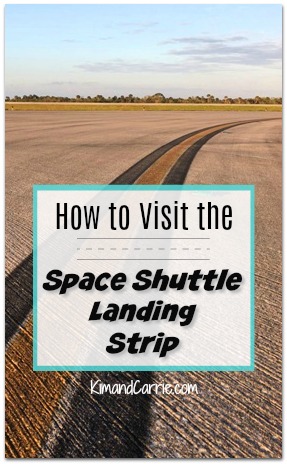 As an Orlando resident, I have been able to experience a lot of cool things to do at NASA and Kennedy Space Center. I’ve done NASA Social events where I’ve been able to walk on the launch pads and see how the space shuttle tiles are made. We bought tickets to walk around a space shuttle before it was brought down the road to the Atlantis exhibit. We’ve seen two space shuttles in the VAB at once as they were being prepped for leaving for museums.

The Gateway to Space 5K was another one of those unique experiences.