As one of the newest hotels on the Space Coast, I can see why. It’s just a 20 minute drive to the Kennedy Space Center, and the property is packed with modern amenities that many other older hotels are missing. (It’s a great place to stay if you are doing the Gateway to Space race!)

The Holiday Inn Titusville is large, modern and spacious. Oversized guest rooms are connected for free high-speed internet access, which really is superb compared to many other properties that I’ve stayed at, where the Wifi is not free.

I stayed in a King Room Executive Non-Smoking, Room #326. A video tour of the room can be viewed on our YouTube channel:

My main problem with my room at the Holiday Inn Titusville was that it smelled like a casino room. I haven’t smelled a room like that since Atlantic City. You know – cigarette smoke trying to be masked by air freshener yet not working.

That was the first impression as I got when I opened the door, as the wave of sicky sweet smoke smell filled my nostrils. It was gross, and I instantly double checked to see if I was in a non-smoking room, and if this was a non-smoking floor. Yes to both accounts.

So I’m confused as to why my room reeked (A variety of other guests have also complained about musty odors on TripAdvisor, too).

To be fair, I didn’t alert the front desk, because I knew the hotel was filled to capacity that night. I also was too tired to change rooms, and shouldn’t have to when I requested a non-smoking room.

Also, my neighbors in the adjoining room (there was a connecting door) were quite loud. I heard their TV, and muffled conversations. I don’t think they were partying, just loud talkers. So every time the air conditioner cut off, it was really noisy in my room.

Then I figured out to leave the fan on high all the time, and it muffled most of the noise.

The bed was decently comfortable, leaning more towards the firm side than soft. Their “Simply Smart” bedding, with sheets and a blanket, lets you control your temperature while sleeping, rather than having one big duvet.

I REALLY liked the fact that both a firm and a soft pillow were on each side of the bed, with pillowcases unobtrusively telling you which was which. I’m so tired of the stupid down feather-like pillows where your head sinks to the bed in most hotels.

The firm pillows were appreciated, and a pillow library was also available if I needed more.

The bathroom was modern and updated. It wasn’t one of those old hotels where the bathroom made you cringe at the thought of taking a shower.

Instead, it was clean, simple and updated to today’s tastes.

A microwave and mini refrigerator were much appreciated in the room, too.

The lobby and check-in area were wonderfully modern in design and spacious. I liked the communal seating areas by a fireplace and TV, which happened to be airing a NASA press conference that I had sat in on the previous day.

A few computers in the lobby offer internet access.

The laundry room was small, clean and efficient. A workout room offered just the basics, but apparently if you want something more involved you can get a free pass for a gym nearby.

Yes, there was a pool, which I didn’t have time to try out, but was popular among the kids.

The surprising feature of the Holiday Inn was Bapa’s Bistro and Bar. The prices were reasonable and the portions were large. The Reuben sandwich I had was really good, and the restaurant filled up pretty quickly, with plenty more room service orders being phoned in.

For breakfast the prices were definitely very reasonable for a hotel restaurant, with excellent “Kids Eat Free” promotions.

The Holiday Inn Titusville is just one of many hotels all located in roughly the same area on the same exit in Titusville. It’s located on I-95 at Highway 50, Exit #215. The hotel is located on the same side street as the Hampton Inn and Fairfield Inn and Suites, with a Cracker Barrel located nearby, so it’s a matter of price and preference (not distance) when choosing from these locations.

It’s a super easy drive from the Kennedy Space Center. Just turn left out of KSC, and keep going straight. You’ll be on the 405, and you’ll keep going until you get into the heart of town, where there’s a Target, other hotel properties, restaurants and more located in a cluster. Turn left, go under I-95, and turn right onto the road where the hotels are located – look for the Fairfield Inn because the signage is hard to see.

If it hadn’t been for the stinky room (and possibly the noisy neighbors, too), I would whole heartedly recommend the Holiday Inn Titusville. 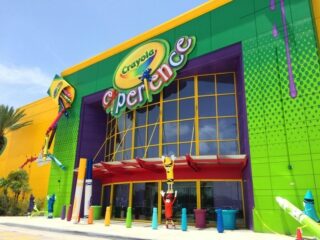 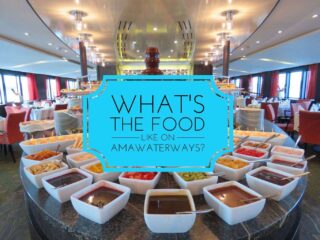 Ugh, I can't stand when that happens. Smoke smell can just make you sick to your stomach. That's a shame you couldn't change (not their fault of course). Guess that happens though on a busy weekend.