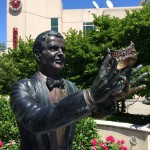 The Miss America pageant has always been synonymous with Atlantic City, New Jersey. Even when they tried to move the pageant to Las Vegas – and then ended up bringing it back to AC. The gowns, the crown, the pomp and pageantry of it all touches the heart of little girls all across America each September, and many an older woman, too!

The one and only place to see Miss America photos and memorabilia over the years is at the Sheraton Atlantic City. The Miss America Organization does not have an official museum, so this unofficial collection housed for free in the public areas of the Sheraton is the best place to revel in the crowning glory of Miss America’s past and present.

Personally, the Miss America history is the ONLY reason I would go back to visit Atlantic City. During a recent stay in the city, I was shocked at how bad the tourism industry was, and the shocking state of affairs in the casino hotels (4 of the city’s 12 have already closed). I hope the Miss America connection can help with tourism!

First of all, everyone is welcome to browse the contest artifacts in the Sheraton Atlantic City. You don’t have to be a guest at the hotel. It’s a decent walk from the outlet stores, so you don’t have to drive out of your way to explore the history.

When you walk inside, you’ll walk through the lobby to the circular room behind it. You can’t miss it. The large glass panels in the walls protect the gowns, scepters, shoes and other artifacts from previous Miss America’s, as well as the current reigning Miss America.

No where else can you get this close to the Miss America crown. (Keep reading to see how you can be “crowned” Miss America by Burt Parks!

Why not have a drink at the Shoe Bar – aptly named! – too?

Roam the halls and you’ll find massive portraits of Miss America’s, as well as historical panoramic photos that detail what it was like to film the show way back when.

In fact, the hotel has a collection of 478 photos throughout the property, many of them part of a rare and rarely seen private collection.

Downstairs, even the Starbucks has a Miss America theme, with old murals of women in old-time bathing suits gracing the walls.

Outdoors, the Miss America history continues with photos on display along the exterior wall, highlighting each decade from 1921 to 2000.

The Sheraton is not the only venue to have Miss America history, though.

Walk along the Rose Walk situated in the sidewalk outside of Tanger Outlets. Each Miss America is honored with a plaque and a quote or a little more information about the young woman.

Fittingly, the Rose Walk is lined with – what else? – Knockout Rose Bushes.

Being Crowned Miss America: How You Can Do It!

Have you ever dreamed of being crowned Miss America? Want to have the crown placed upon your head as the iconic Miss America song is sung by Burt Parks?

You can be crowned Miss America – twice – in Atlantic City, New Jersey thanks to two statues that make great photo ops for anyone dreaming of being Miss America 🙂

Behind the Sheraton Atlantic City Hotel, just across from the Atlantic City Convention Center, is a small courtyard hidden in plain sight. Most people won’t notice the small statue tucked into the corner of the circular garden. They’ll just walk on by.

But for those who walk towards the diminutive Burt Parks statue, you’ll have precious Miss America memories, photos and videos to share!

Burt Parks is known for hosting the Miss America pageant from 1955 to 1980 and singing the show’s signature song, “There She Is.” His iconic status with the Miss America organization is celebrated in this interactive statue at the Sheraton Atlantic City.

If you simply stand under the crown that Burt Parks is holding outwards, it looks as if you’re being crowned Miss America. Activate the motion detector inside the crown, though, and you’ll hear a rendition of “There She Is” sung by Parks.

What if you’re on the Boardwalk, though, and want to enjoy a Miss America experience?

There is a crowning statue on the Atlantic City Boardwalk, too. The female statue of a Miss America is modeled loosely on former pageant winner Mallory Hagan, Miss America 2013, but incorporates features from other previous winners, as well.

This statue doesn’t have the sound effects, but has a nice background featuring Miss America graphics with a rose garden (fitting for Miss America!).

This location is also the most crowded, and you’ll likely wait in line on a crowded day to be “crowned.”

Both of these statues are free to the public and great photo ops, no matter what time of day you’re visiting Atlantic City.

I was Miss Arkansas 1965 and have my original designer gown, cocktail dress, hats and high heels. Rhonda Lee Oglesby, now Rhonda Coullet, wrote a musical “Runaway Beauty Queen. Any interest there or pointers on who could use these historical frocks.? Thanx!

Rhonda, That is awesome!!! Have you contacted your state history museum or other museums in your state or city? They might like to display your memorabilia.