For a decade, we lived in Orlando and never made it to the Florida Strawberry Festival. Every year we meant to go and then work was too crazy or we had other commitments. So, finally, in 2019 we put the agritourism event on our calendar and promised ourselves we’d go. We were so excited to see what the big fuss was about the annual Strawberry Festival in Plant City, FL.

Was it worth the wait? 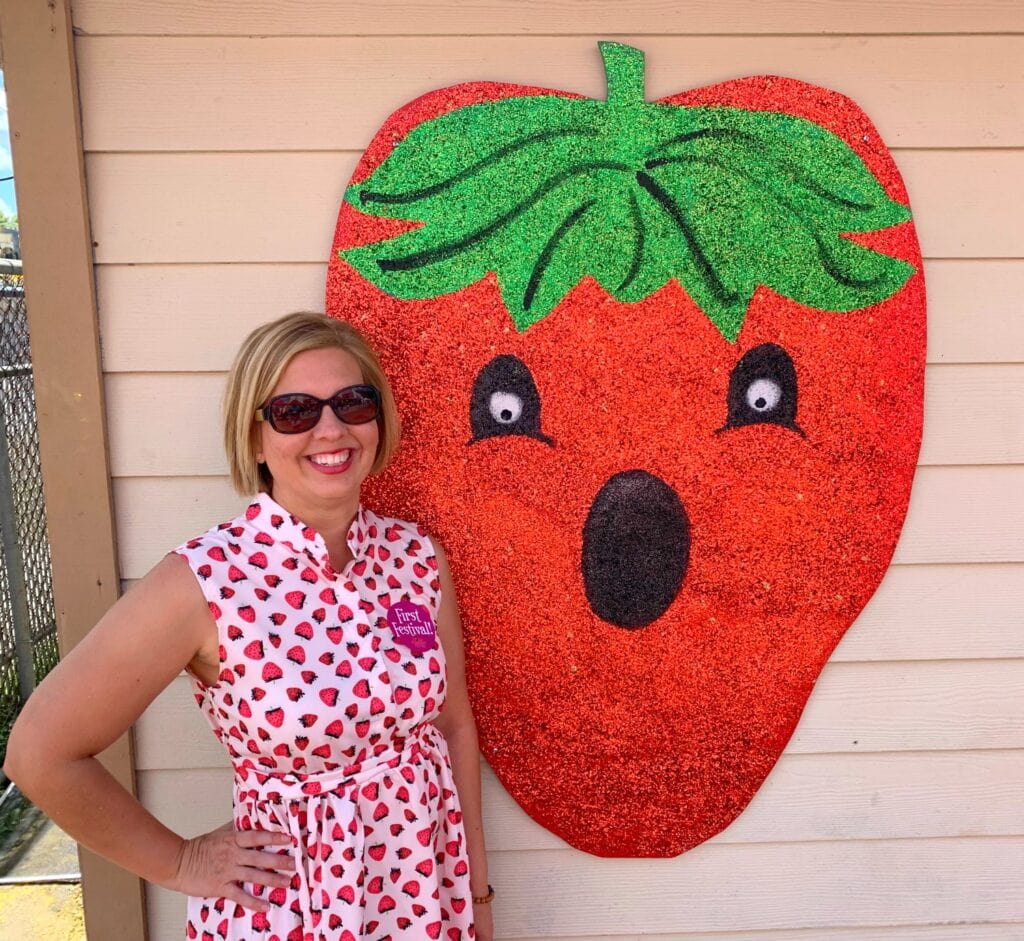 We’d say no. Absolutely no.

And here’s why we won’t go again.

What is the Florida Strawberry Festival?

This annual festival is held in Plant City, Florida. This area of Central Florida, between Tampa and Orlando, is known for growing strawberries every winter.

In fact, there are 10,000 acres of strawberry fields in the Hillsborough County area and 2,800 farms. 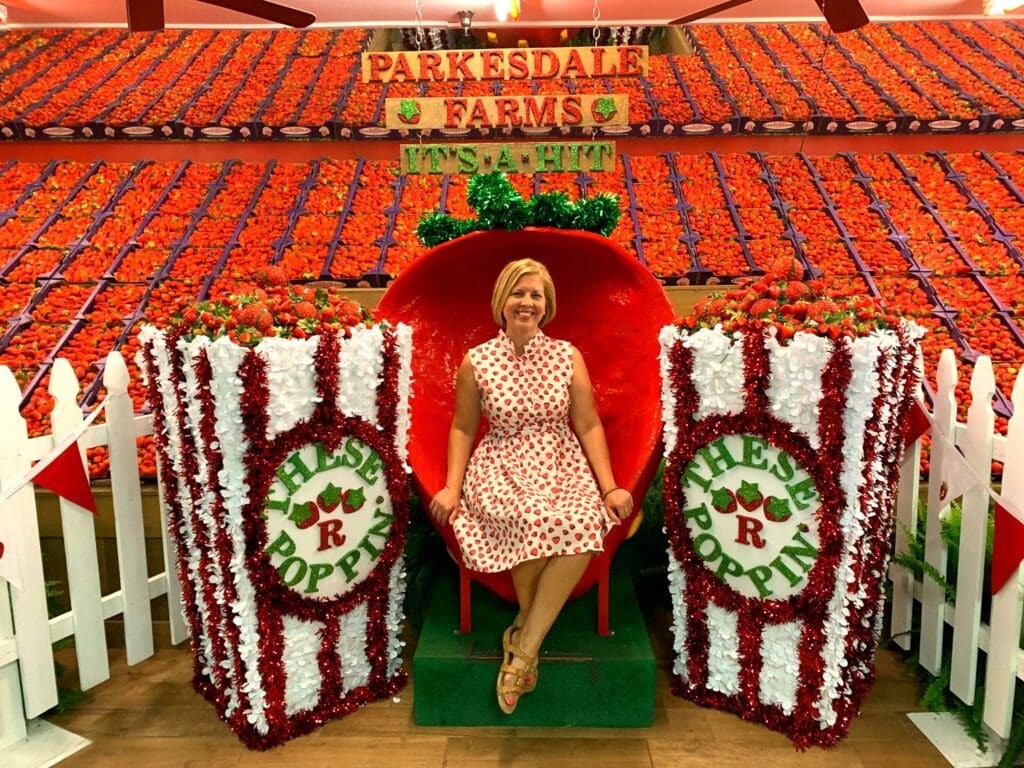 Strawberry season can start in December. So by late February and March, when the festival is held in Plant City, the growing season is coming to an end.

The Florida Strawberry Festival celebrates the strawberry crop. Well, at least that’s the theme of the festival. What we found was that strawberries weren’t as common as we’d like.

Florida Strawberry Festival concerts are among the biggest draws for the event. Big name headliners have concerts at the festival. In 2020, some of the headline concerts are:

Do You Have to Pay for the Strawberry Festival in Plant City, Florida?

There are often coupons or deals to get discounted admission or discounted rides wristbands. Publix often has coupons for the festival.

Just like with any county fair, you will need to pay for rides. 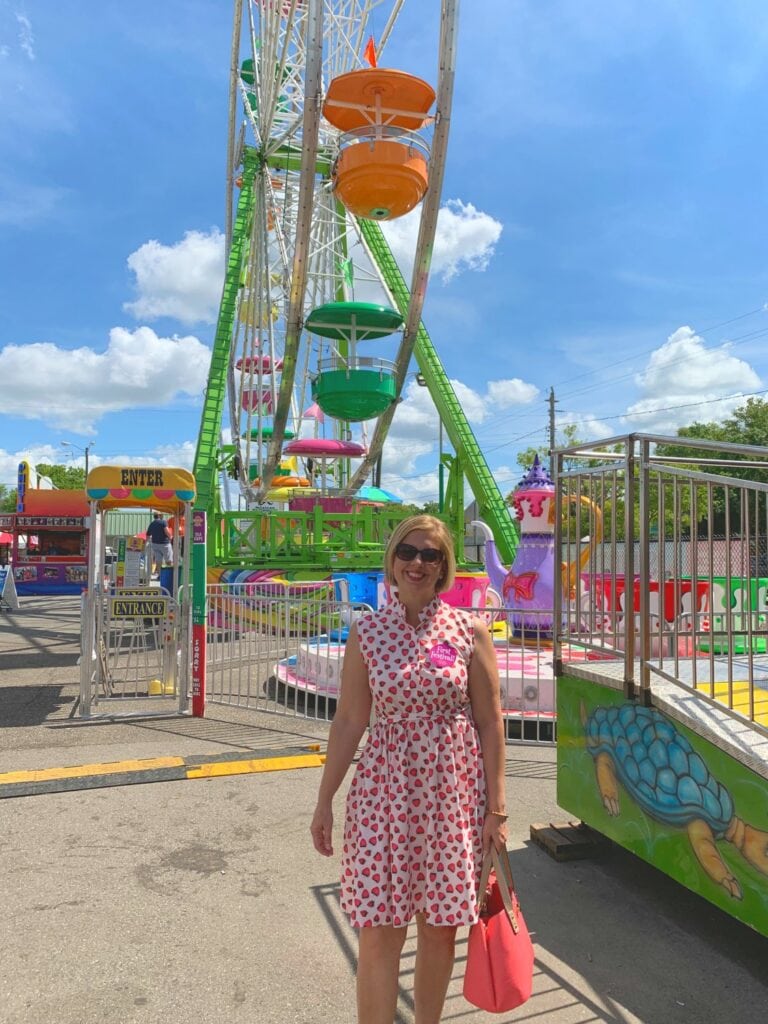 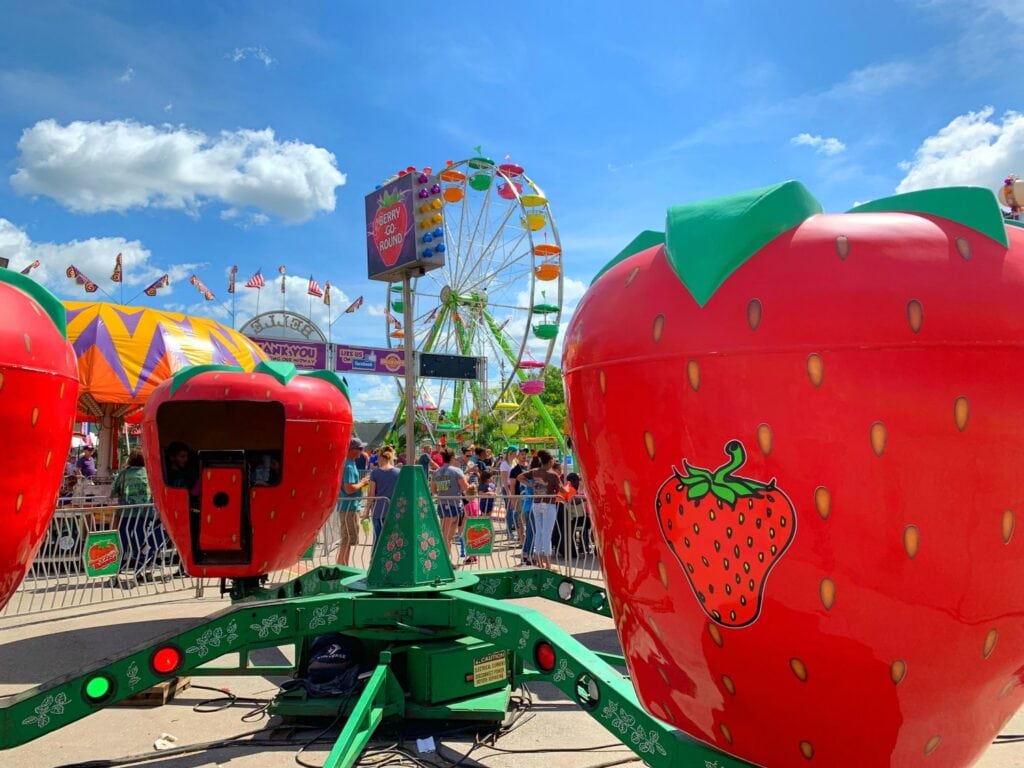 Headliner concerts are an extra charge, starting at $25.

And you’ll likely need to pay for parking. Prices are all over the place for parking, but generally start at $10 for the cheapest and farthest.

What We Liked About the Florida Strawberry Festival

There were a few things that we could appreciate about the uniqueness of the strawberry festival in Plant City, Florida.

And if you’re thinking that it looks like I had a lot of fun at the Strawberry Festival, well, we made sure to take as many photo ops as possible. Because I knew I wasn’t coming back. And I needed to write a post and have some great photos. 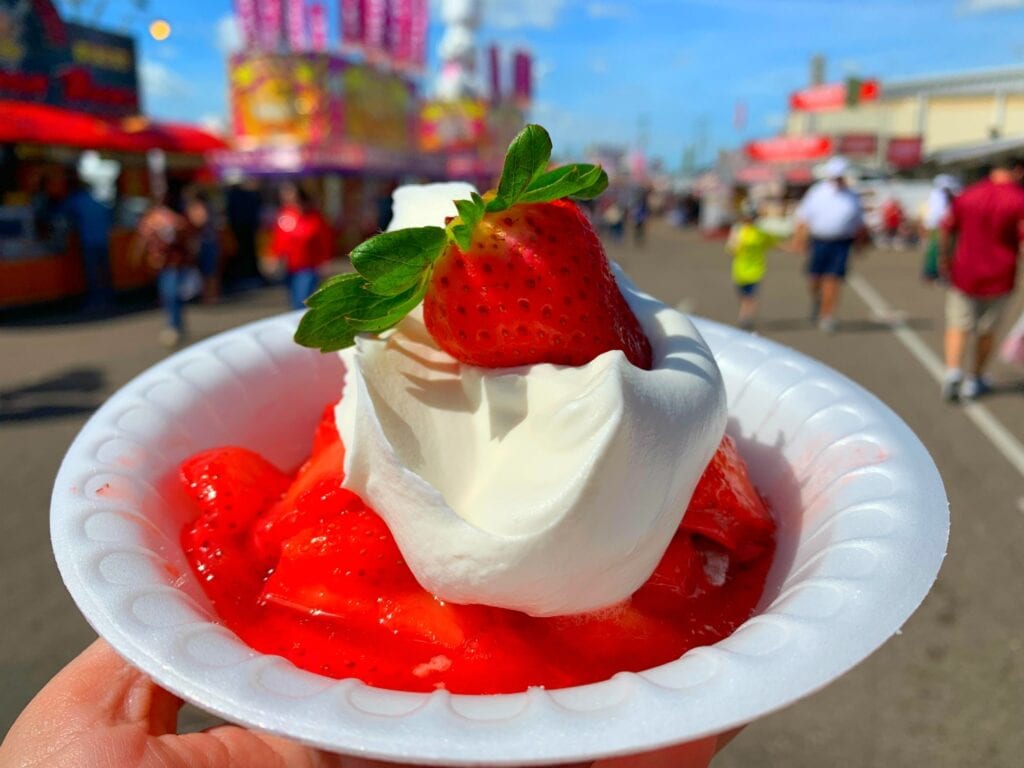 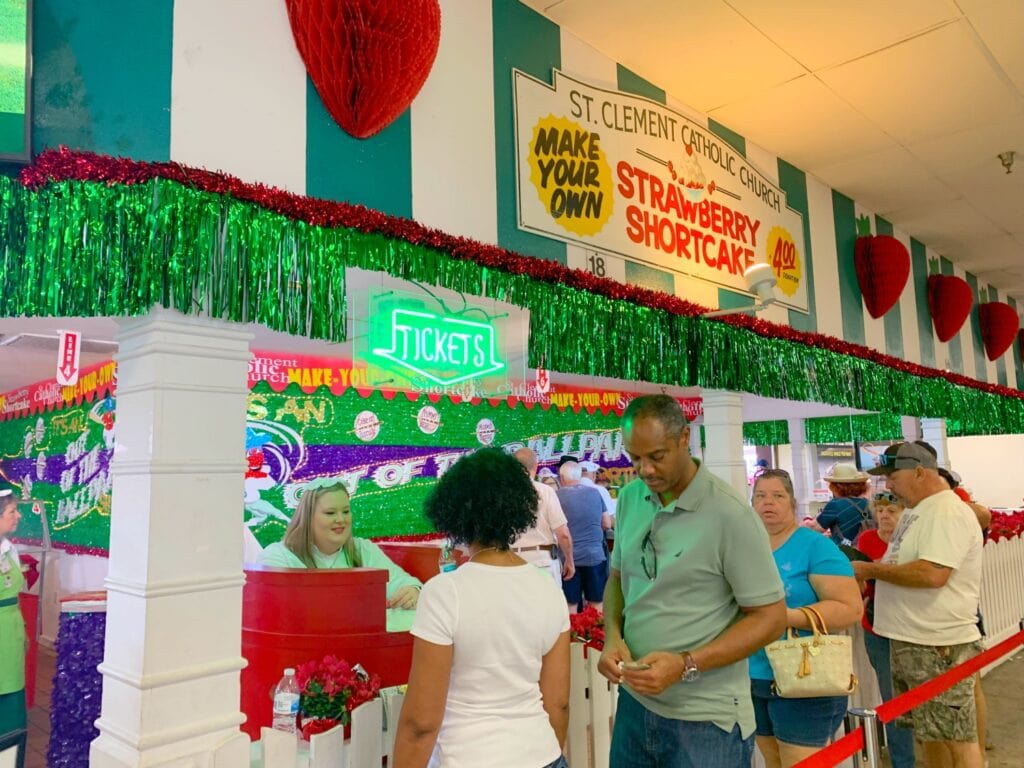 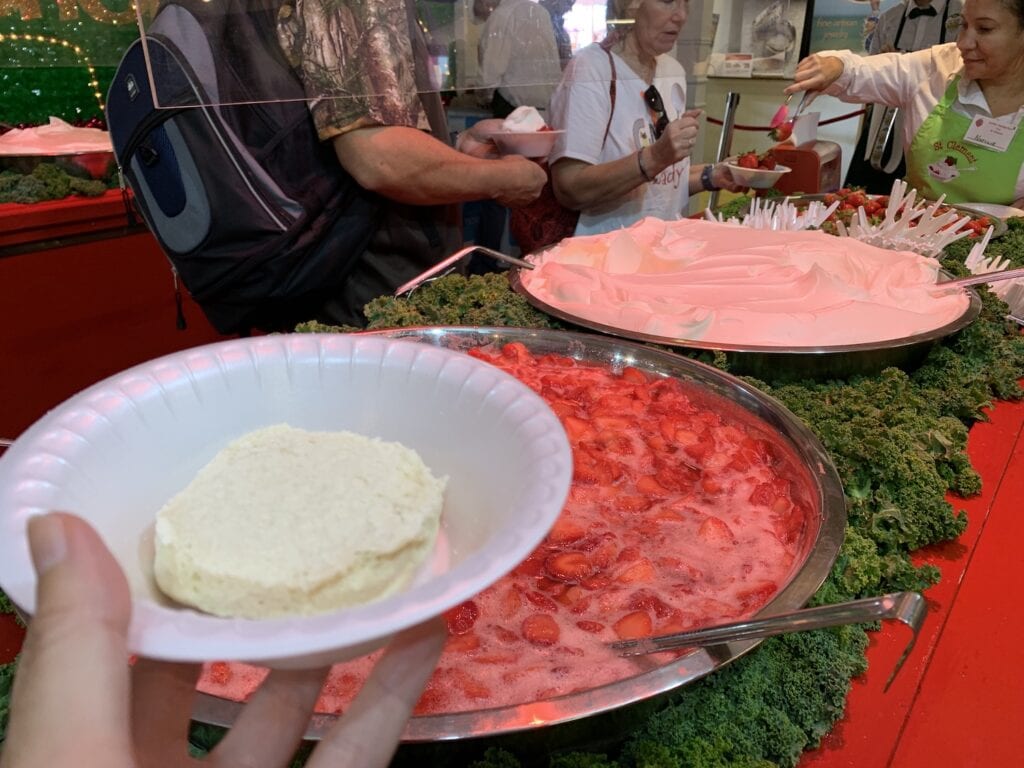 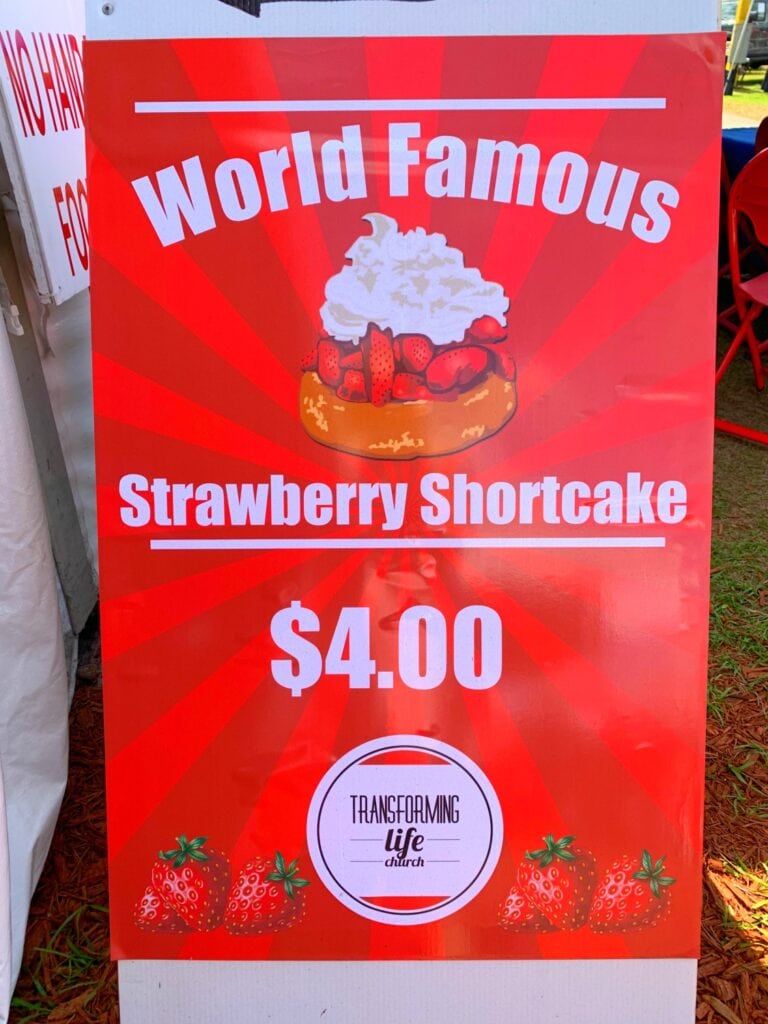 Second, the strawberry mascot is super fun. There’s not too many places where you can have your picture taken with a giant strawberry. 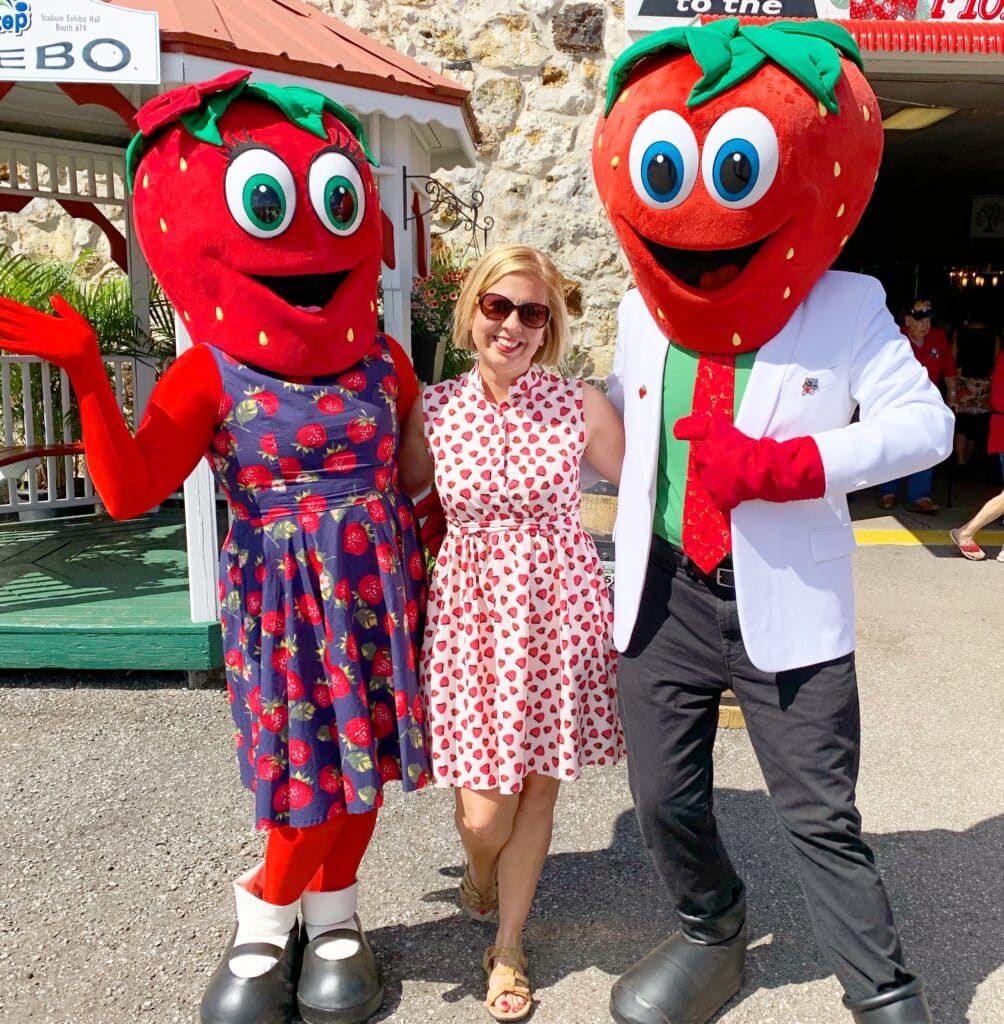 Third, seeing a replica (called the Strawberry Production Exhibit) of some tractors and strawberry fields was interesting. And the photo op of sitting in a John Deere tractor was cool. Even though you had to wait forever until all of the kids (understandably) were done climbing on it and playing with it for a very long time. 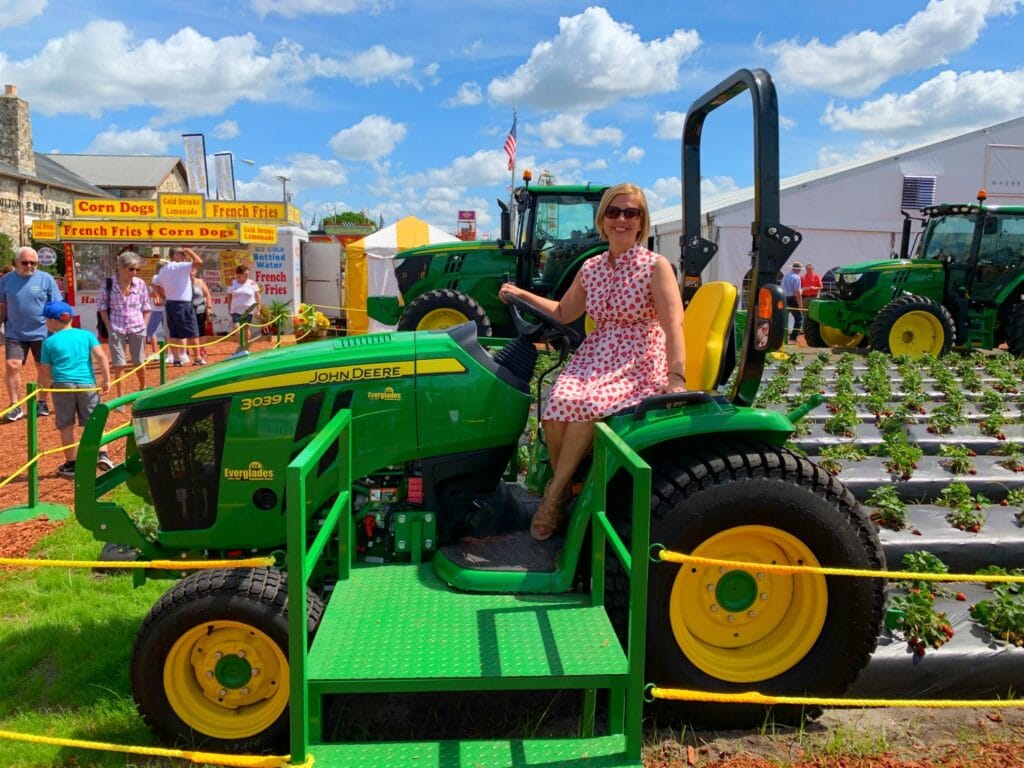 Our frustration started before we even got to the festival. We came early in the morning on a weekday. So we don’t know what traffic crowds are like on the weekends, but we hear it’s pretty congested.

You need to pay for parking at the Strawberry Festival. And there are lots of parking lots and empty fields designated for parking. Many have their prices listed on big signs before you pull over.

We didn’t know how far you could get to the actual festival fairgrounds with parking. We passed a few parking lots thinking we could get closer. Then saw a big sign in the middle of the road that said parking was full. But we couldn’t turn around so we figured we’d keep driving like everyone else.

Turns out there was plenty of parking past that sign. And it was cheaper than the parking lots that we had passed that were further away.

It seems deceitful and underhanded to try to force people to pay more and park further out by lying about parking ahead. There should be some sort of controls on that. 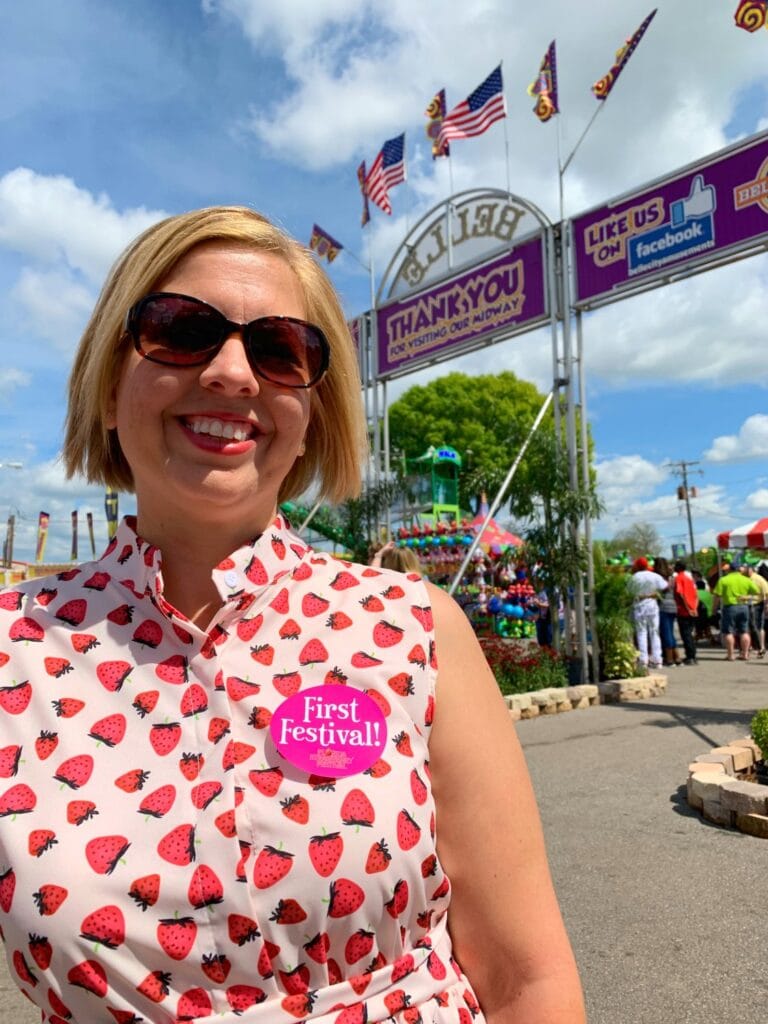 Plus, there are multiple entrances to go through and park by. As a first timer, it’s a little confusing trying to figure out where to go.

Okay, I know it’s a strawberry festival. And, yes, there were places selling all things strawberries. 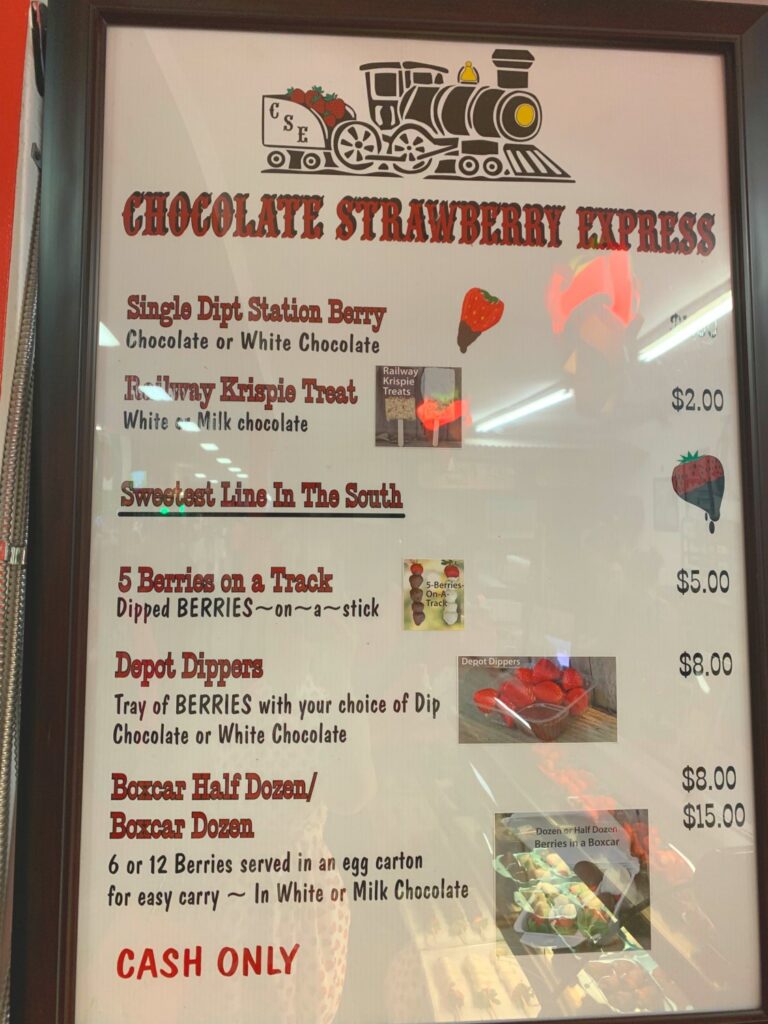 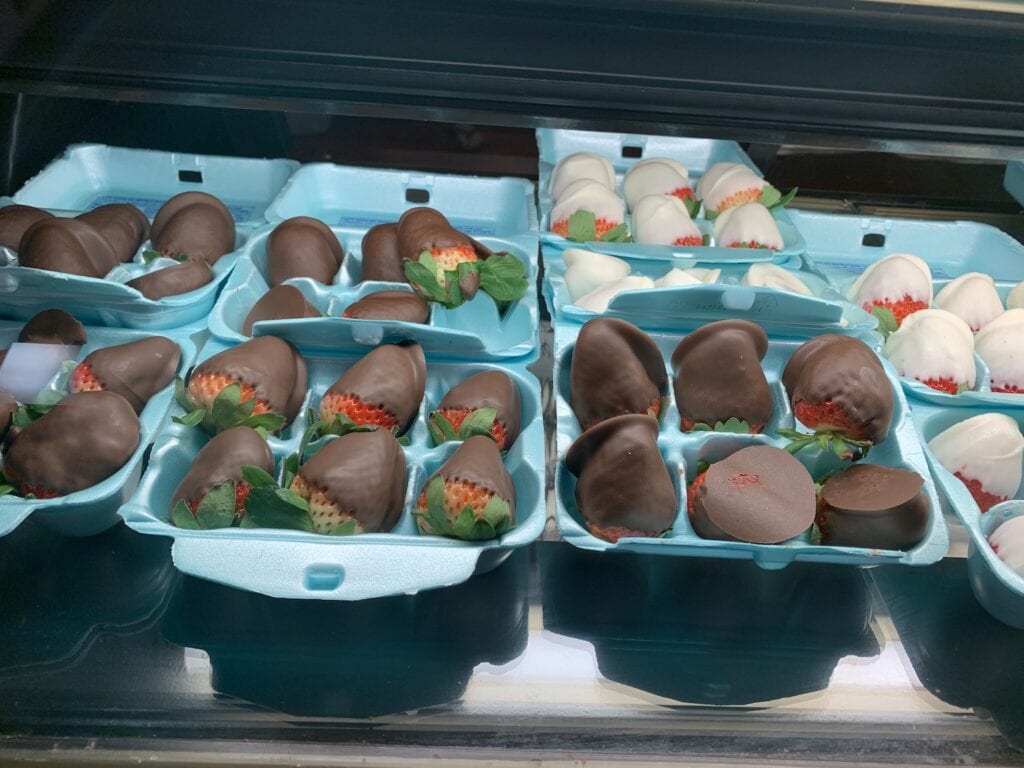 But for a festival named after the fruit, what we found was there wasn’t AS MANY strawberry attractions as we had imagined.

What we found was general fair food. With strawberry desserts as options. 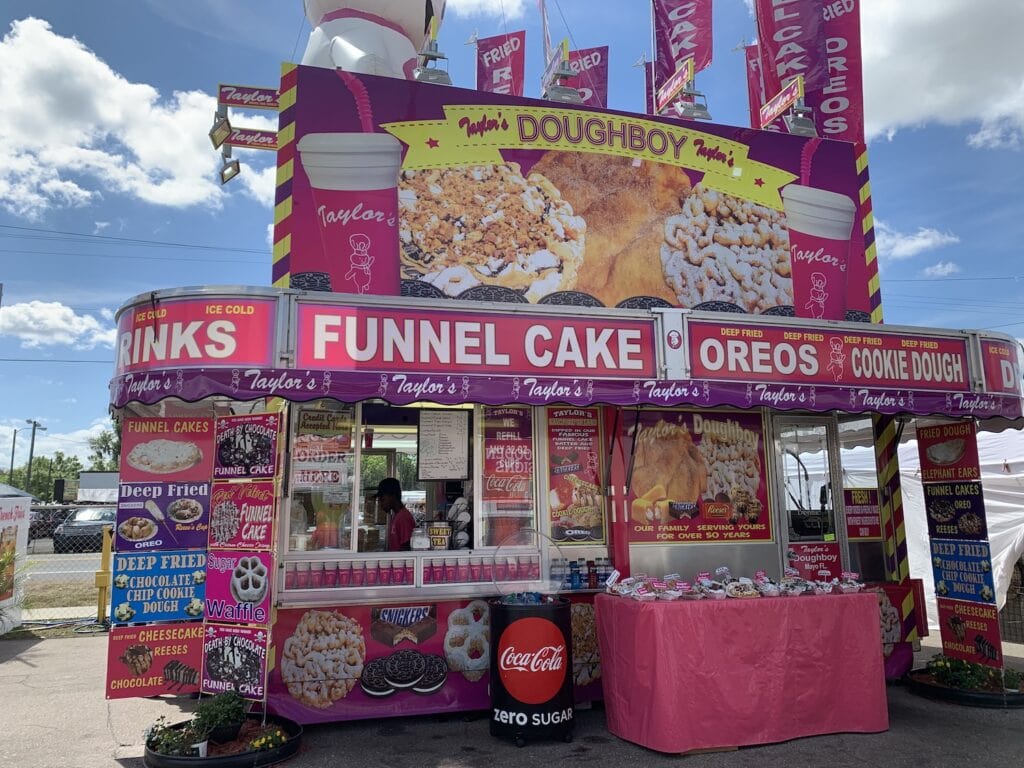 And even the strawberry production area seemed to be lackluster compared to what it could have been. It was interesting, but it just seemed so small in comparison to the rest of the festival celebrating strawberry growing.

Needless to say, March in Florida can be hot. And it was HOT when we went.

There’s not much you can do about that in a fairgrounds.

But it can be miserable walking around in the heat for hours with lots of crowds. And we were miserable.

It’s just not fun when you’re paying to be there and can’t find a shady spot when walking around. 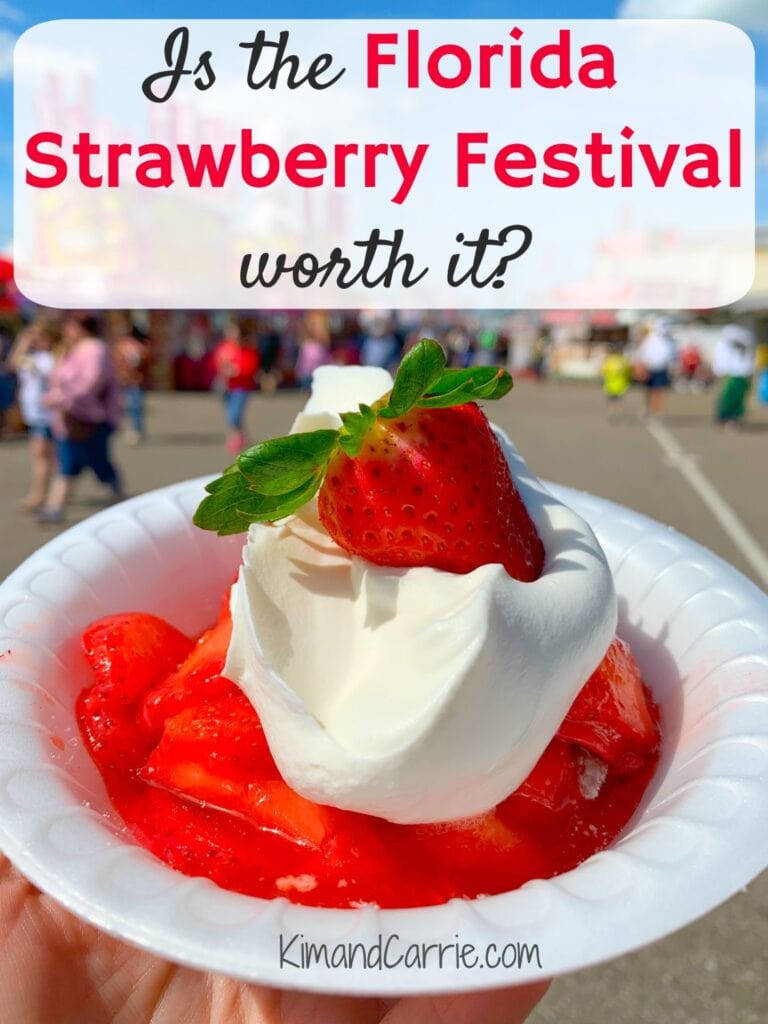 Overall, when it comes down to it, the Florida Strawberry Festival is just a typical county fair or state fair. With some strawberry themes.

I guess we were just expecting more. The strawberry festival in Plant City is talked about so much, that I had built it up to be something bigger and better than it was.

If you’re not paying for midway rides, and you really don’t want to eat corn dogs and funnel cakes, there’s not a whole lot to do at the festival. Other than livestock shows and exhibits.

Concerts are going to be some of the best entertainment. By the time you add up concert admission, parking fees, food bought in food trucks, and general admission, you’re starting to get close to the cost of a Disney theme park ticket. It’s still definitely cheaper than Disney World. (And you can find Disney knock-off attractions.) 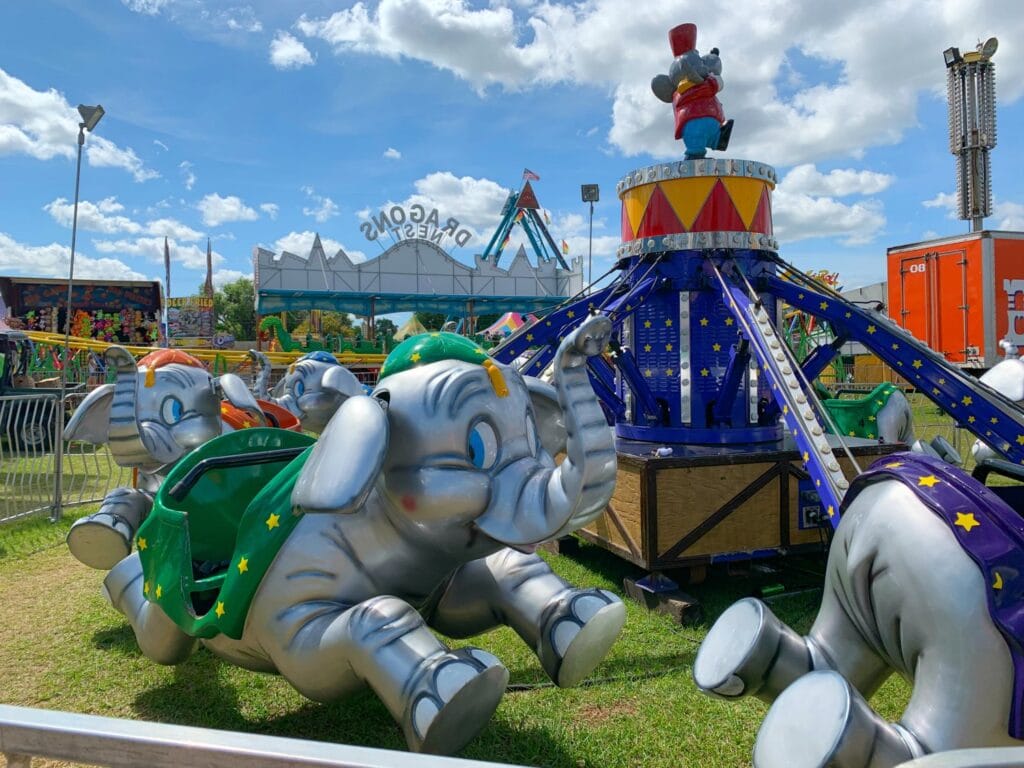 But I’d argue that you’d have more fun by going to Disney.

I went in 1992, loved it great memories of my childhood I was 12. First time to the states from Scotland.

It was an entire city of pride, and earned by the integrity and entertainment in the early 90's and before. Now it seems like a very condensed money making scheme, every pitiful. Very sad. Thanks for the article I won't waste my time, I was hoping for some nostalgia but this would have upset me.

Well put. We've gone a few years because my daughter (5 years old) loves the rides but I'm sure we could find something closer that has carnival rides.