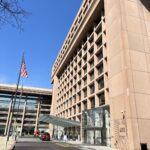 For our week-long stay in Washington D.C., we wanted an affordable hotel that was within walking distance to all of the major monuments and visitor sites in the nation’s capital. We quickly found the Hilton Washington DC National Mall near The Wharf as an ideal place to stay. We loved a lot about the location, but there were things we definitely did not like. Here is our honest hotel review.

Are you wanting to see the cherry blossoms? Check out our Ultimate Guide to Washington D.C.’s Cherry Blossom Festival.

Our Washington D.C. Packing List has all of the essential items you might forget to bring for your trip to America’s capital.

The hotel is perfectly situated between all of the major tourist attractions in Washington D.C. The Hilton Washington DC National Mall is located just behind the Spy Museum. Both buildings are in the same courtyard and you can very easily walk between them.

A Metro station (L’Enfant Plaza) is located underneath the hotel. This is very convenient for using public transportation from the airport and around the city. You never have to step outside to get to the Metro station. Just go downstairs, walk through the small shopping and restaurant area, and you will enter the Metro.

Though this Hilton location has The Wharf in its name, it is not actually located ON The Wharf as other hotels are (such as Canopy by Hilton and Hyatt House). It is an easy 7 minute walk to the actual Wharf area which has a huge selection of restaurants to enjoy. The walk does go down hill, but there is a ramp to use for those that cannot use the steps.

We walked everywhere in Washington D.C. from the Hilton and think this is the best location for tourists. The Wharf is located along the walk to the Tidal Basin, where you will find the Jefferson Memorial, and cherry blossom blooms. It is 7 minutes to The Wharf, and 20 minutes to the Tidal Basin from the hotel.

We stayed in room 14-180 for seven nights. We had a King Size room and chose the hotel room via the Hilton Honors app before arrival.

The hotel rooms were nice and well appointed. However, we found that they could use some updating and were not the most comfortable hotel rooms we have enjoyed.

The King size bed was adequate, but was slightly hard and uncomfortable. We did not sleep well on the bed because it was hot and not very soft.

Pillows in hotel rooms are usually not great. The Hilton was no exception. The down pillows had almost no support or height to them. We requested foam pillows from housekeeping and those were also very flat and non-supportive. We actually had three pillows piled on top of each other just to get our head elevated while sleeping.

Our biggest complaint was the heating and cooling system. When we arrived at midnight to our hotel room, it was so warm! The thermostat was set to 70 degrees but it felt warmer. We tried setting the thermostat cooler to quickly cool the room so that we could sleep, but it only went to 65 degrees. Though we manually kept putting the temperature down to 65, it would jump back to 70 degrees in a little bit. This occurred all through the night and we were constantly waking up hot.

Even the 65 degree temperature seemed very warm, and we never felt cool air flow in the room. During our stay, temperatures ranged from 70 degrees outdoors to 30 degrees at night. The colder it got outside, the warmer the settings seemed to be in our room. In fact, on the coldest night, we woke up in hot sweats during the night because it got so warm in the room. We were only sleeping with a thin sheet on and had removed the duvet cover, and still we were sweating with the temperature set to 65 degrees.

The bathroom was another source of major inconvenience. The weird design looks like something from the 1990s. There is a large floor to ceiling window in the bathroom looking into the bedroom. It is covered with silver metallic mini blinds. If there was a view to be seen from the bathroom, that would be one thing. But there really wasn’t. It just looked dated.

Beyond the outdated decor, though, was the fact that the window let in a ridiculous amount of light into the bedroom area during the night. There was an automatic night light on the mirror in the bathroom that we couldn’t control. The light in the bathroom shone through the window so that the room was lit up. We tried stuffing towels around the mirror to keep the light from shining to no avail.

The room was very dark, and even my husband complained about not being able to see well while shaving or getting dressed. The lighting was strange and not well placed. There were no overhead lights in the room, other than in the bathroom.

The furniture was sparse and very uncomfortable. It reminded me of something you’d buy on Amazon because it looks good and is cheap, but is not meant to actually use. The one arm chair was really uncomfortable. The ottoman was lightweight and cheap and kept rolling around on the hardwood floors any time you accidentally touched it. The desk was streamlined, but the light on it was clearly not meant for anyone actually trying to get work done.

We found the huge TV to be an excellent amenity. But the position hanging on an empty wall with no other decorations or art around felt like a college apartment.

We were really impressed with the hotel safe. Most safes are so small that you can’t fit a computer inside. However, this safe was tall and deep enough to easily put a lap top inside.

There are not a lot of amenities at the hotel. There is a pool, but it was closed during our stay in March. A fitness center is also available, though we did not visit it.

In the lobby, there is a Starbucks which is really popular. It seems that the Starbucks is used not only by hotel guests, but all of those working in buildings around the hotel, as well as visitors coming over from the Spy Museum area. Expect long lines at the Starbucks.

There is very limited seating in the hotel lobby. For a space as big as it is, it is very sparse. There could easily be more chairs available for guests.

The restaurant and bar are a welcome amenity at the hotel, since there is no other dining anywhere nearby, other than walking to The Wharf.

During our stay in March 2022, the restaurant and bar staff were completely overwhelmed. This was during a time of staffing shortages and also the peak bloom time of the cherry festival. There were so many people trying to eat or get take out food that the meal took quite a long time. However, every staff member was polite, courteous, nice and really trying their very best.

Among our favorite dishes on the Hilton Washington DC National Mall menu were the huge pretzel, the pepperoni pizza and the DC hot dogs. All were really great.

One major drawback was that you could not order food to go from the restaurant without actually going to the restaurant. You could not call in an order and pick it up when it was done. Which created a backlog of people standing at the bar waiting to place a take out order, and then taking up the chairs while they waited but didn’t eat.

A small snack stand is available for water, beverages and some snacks. There is no gift shop.

There is a work station with two computers to use. It is located across from the restaurant and bar.

On the lower level with the Metro station you can find quick service restaurants, such as Jamba Juice, Pork Belly’s and Charlie’s Cheesesteaks. However, these restaurants have very limited hours and usually were closed by dinner time. We also didn’t find any that were open for breakfast, either, other than a sushi place.