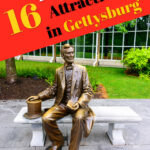 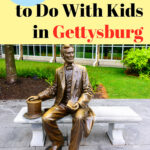 When it comes to things to do in Gettysburg, PA, the first things to pop in your mind are all likely related to history and the Civil War. After all, this small Pennsylvania city was home to the 3-day battle that essentially led to the end of the Civil War. But, while the history is worth diving into, there are so many more things to do in Gettysburg – especially if you’re traveling with kids!

Family activities in Gettysburg range from the obvious historical attractions, like the battlefield and museums, to the unexpected and wacky like pig races and a candy shop with an elephant museum attached. And, of course, you can’t forget the cat-soldiers!

Many of the exhibits and activities in the area are seasonal and closed during the cold, snowy winters, though several are open year-round. If you’re traveling in the winter, just be sure to double-check the hours of your intended attractions.

Before you head out on your Gettysburg adventure, be sure to print out a Li’L Lincoln to explore with you. Then snap a photo and share with hashtag #LilLincoln to share your adventures with the world! (Or just keep them as a family memory!)

Discover How Kids Lived During the Battle of Gettysburg

The Shriver House Museum is one of the most popular museums in Gettysburg. Here you’re transported back in time as you walk through the restored home of a Civil War soldier and his family.

During the guided tour, you see first-hand the living quarters of the family, including children Hattie (7) and Mollie (5). You will also learn how almost all homes in town were taken over by soldiers, either to be used as hospitals or to house the soldiers, including the Shriver House.

While many other exhibits in Gettysburg focus on the soldiers, the Shriver House is the best glimpse into the life of the civilians.

Rebecca and Ruth Brown were just 11 years old when they began to make cat-soldiers out of molding clay. Now, there are over 8,000 furry soldiers depicting various battles throughout the Battle of Gettysburg.

Each diorama is made to scale, with each cat-soldier representing a real soldier, giving a true bird’s eye view of the battle.

While the soldiers certainly didn’t have furry faces and tails, everything else about the exhibit is historically accurate, making this a fun way to teach kids about the battle.

A tour of the UTZ potato chip factories is one of the best free things to do in Gettysburg. UTZ is a popular Pennsylvania chip and pretzel brand and on their UTZ Chip Trip Tour, you can see exactly why.

You’re guided step-by-step through the entire production process, learning about the ingredients used, and the history of this Pennsylvania icon, all while basking in the aroma of freshly made chips.

Just be prepared to buy a bag after, as you’ll certainly have a craving!

Stand in the Place Where President Lincoln Gave the Gettysburg Address

On November 19, 1863, President Lincoln gave a “few appropriate remarks” at the dedication of the National Cemetery. His remarks later became known as the “Gettysburg Address” and are now considered one of the most important speeches in history.

Today, you can visit the cemetery and stand in the exact spot Lincoln stood while giving the address. It is one of the first things kids learn in history class, so standing in that spot can be especially exciting and memorable to students.

If you are visiting Gettysburg, you are likely visiting the Gettysburg Battlefield. Before you jump right into the tour of the battlefield, be sure to stop by the museum and visitor center. If you only spend a short amount of time here, don’t miss the A New Birth of Freedom video and the cyclorama immediately after.

While the other exhibits are well worth a view as well, the video and cyclorama are musts and will help put the things you’ll see on the battlefield in perspective.

Retrace the Steps of History on the Gettysburg Battlefield

Visiting the battlefield is a must when visiting Gettysburg. After all, the entire town is built around the history of this multi-day battle. The battlefield expands a few miles and can be explored via a self-guided car tour, by hiring a guide, or joining a bike, horseback, or Segway tour.

To go at your own pace, the self-guided car tour with audio is perfect. You can also download the Gettysburg Battle App on your smartphone.

The battlefield is extensive so if the little ones are easily bored, you can keep it to the main points of interest like Little Round Top, Devil’s Den, the High Waters Mark, and the Soldier’s National Cemetary.

Burn Off Some Energy on a Battlefield Hike

If the kids have some extra energy to burn off, there are also several family-friendly hikes in Gettysburg. You can even walk the same mile from Highwater Mark to the Virginia Memorial that the Confederate soldiers marched on July 3, 1863.

Other hikes include Cemetary Ridge North & South and the popular Big Round Top.

For a day of outdoor fun that doesn’t involve history and monuments, take the scenic drive to Fields of Adventure. While some activities are seasonal, they range from a corn maze and pumpkin patch in the fall to an animal barnyard, climbing tires, sandbox, tractor ride, rubber duck races, and all kinds of other farm games for the family.

Throughout the year they also have special events, like pick-your-own-tulips, breakfast with the Easter bunny, a Father’s Day BBQ, and more. Be sure to check the calendar to see if anything is happening during your visit!

Catch the Pig Race at Land of Little Horses

While the horses are the main attraction at Land of Little Horses, they have so much more too. Every day, twice a day, you can catch the pigs race around the track. Then, take a pony ride, train ride, or learn how to groom one of the miniature horses.

Don’t miss the Mane Event either. With horses that have been featured in America’s Got Talent, Ringling Bros. Circus, and more, it’s a show worth watching.

Go on a Safari at Catoctin Wildlife Preserve

This area may not be where you would expect to head out on a safari but if you head just a bit south, you can! The Catoctin Wildlife Preserve offers a daily safari (closed during winter) where you take a ride through 25 acres to see animals like zebras, bison, and camels. They also have cattle, donkey, and goat species from around the world!

Get Spooked on a Gettysburg Ghost Tour

It is no secret that Gettysburg is considered haunted, especially on the battlefield and some of the hotels and restaurants that were originally used as medical tents. You can learn more about these spooky spots and the ghosts that haunt them on any number of ghost tours.

A family ghost walking tour is available and appropriate for kids. While other ghost tours are later at night.

Many ghost tours are considered a family activity in Gettysburg but, of course, consider the comfort level of your child before joining.

Baseball fans definitely don’t want to miss the chance to dine at Gettysburg Eddie’s, a family-friendly restaurant located across from the National Cemetery. The restaurant pays homage to Gettysburg’s very own Baseball Hall of Famer, Edward Stewart Plank.

While the restaurant is well known for its burgers, kids under 12 can choose from their own Little Leaguer’s menu.

As you enjoy your meal (don’t forget dessert!), you can take in the sights, sounds, and tastes from centuries ago. If the Dobbin House is full, Sweney’s Tavern inside the Farnsworth House Inn is another great option for a period dinner.

“Like a kid in a candy shop” isn’t just a phrase when you visit Mister Ed’s! There are over 900 varieties of candy to choose from, with many varieties of homemade fudge and roasted peanuts, as well as “old-time” candy like pop rocks, root beer barrels, and wax bottles.

After you stock up on candy, head into the Elephant Museum where you’ll find over 12,000 elephants from circus souvenirs to toys.

Get a Peek into Civilian Life at the Jennie Wade House

Despite the high number of casualties for both the Union and Confederacy, only one civilian died during the entire battle. Jennie Wade was kneading dough when a bullet went through two doors and struck her. Today, you can visit her home which is authentically furnished for a peek into civilian life during the battle. Guided tours are led by actors in period attire for an interactive tour of the home.

Whether the focus is on the educational and historical aspects of Gettysburg or some good old-fashioned family fun, the things to do in Gettysburg with kids are endless!