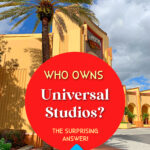 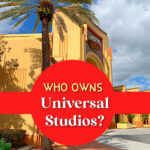 Universal Studios, both the theme parks and movie studios, is currently owned by NBCUniversal, a subsidiary of Comcast.

While you might be shocked to learn that a telecommunications company is the owner of Universal Studios theme parks around the world, the history behind the multiple owners of the theme parks and movie studios is like a juicy novel.

Unlike Walt Disney World, which is owned by The Walt Disney Company, Universal Studios has been owned by a variety of different types of companies that don’t share the same name.

Universal Studios is owned by Comcast in 2023, but you really need to see the myriad of owners from around the world that were previously in control to truly understand how the name “Universal” is a perfect fit for the movie studios and theme parks!

We share all of the details that you will want to know!

What is Universal Studios?

Universal Studios is a film and television production company as well as a theme park operator with parks around the world.

Universal Pictures is the movie studio that makes a variety of films that you know and love, such as Jaws, Back to the Future, and E.T. The Extra Terrestrial.

Universal Studios, both the movie studios and theme parks, are a division of NBCUniversal, which includes the NBC television network in the United States. This is why you will find the Today Cafe at Universal Citywalk Orlando.

NBCUniversal is a subsidiary of the multinational mass media conglomerate, Comcast. Comcast Corporation is America’s largest multinational telecommunications conglomerate. It is headquartered in Philadelphia, Pennsylvania.

Over more than a century, Universal Studios has been owned by a variety of companies. Here is a brief timeline of its major ownership changes:

2000: Vivendi, a French conglomerate, acquired Seagram Company Ltd. and with it, Universal Studios.

2004: General Electric (GE) acquired 80% of Universal Studios from Vivendi as part of a larger deal that included the acquisition of Vivendi’s entertainment assets, forming NBC Universal.

2013: Comcast acquired the remaining 49% of NBC Universal from General Electric, making it a wholly-owned subsidiary of Comcast.

Universal Studios, one of the most iconic film and television production companies and theme park operators in the world, has had a rich history of ownership evolution over the last century. From its humble beginnings as a small motion picture production company founded by Carl Laemmle in 1912, to its current status as a subsidiary of the multinational media conglomerate, the story of Universal Studios is one of ambition, innovation, and growth.

The company quickly became one of the leading motion picture production companies in the country, producing classic films such as “All Quiet on the Western Front” and “The Hunchback of Notre Dame.”

In 1936, businessman J. Cheever Cowdin acquired a controlling interest in the company. Under Cowdin’s leadership, Universal Studios continued to produce successful films and expand its operations.

In 1946, Lewis Rosenstiel, an American businessman, acquired controlling interest in Universal Studios and merged it with International Pictures.

In 1962, MCA Inc. (Music Corporation of America) acquired Universal Studios. MCA was a talent agency that represented major Hollywood actors and actresses, and it used Universal Studios as a vehicle to enter the film production industry.

Under MCA’s ownership, Universal Studios produced some of the most iconic films of the 1960s and 1970s, including “The Sting,” “Jaws,” and “E.T. the Extra-Terrestrial.”

Universal Studios Hollywood, which opened in 1964, was much improved during this time and modernized with the new films that were being released through Universal Studios.

In 1990, Japanese conglomerate Matsushita Electric Industrial Co. (which is now known as Panasonic) acquired MCA Inc. and with it Universal Studios. This marked the beginning of a new era for the company as it entered the global market. However, the merger had many challenges with a technology company owning an entertainment company and two different business cultures.

Universal Orlando Resort was opened in 1990 under Matsushita Electric.

Just five years after Matsushita Electric bought MCA Inc. and Universal Studios, they sold 80% of MCA Inc. to the Seagram Company Ltd. in 1995 for $5.704 billion. You might know the Canadian Seagram Company as the makers of ginger ale, club soda and alcoholic beverages.

In 2000, French conglomerate Vivendi acquired Seagram Company Ltd. and with it, Universal Studios. This marked the beginning of a new era for the company as it entered the global market.

In 2004, General Electric (GE) acquired 80% of Universal Studios from Vivendi as part of a larger deal that included the acquisition of Vivendi’s entertainment assets, forming NBC Universal.

Since 2013, Comcast owns 100% of Universal Studios, which operates as part of NBCUniversal. Under Comcast’s ownership, Universal Studios has continued to produce successful films, such as the Fast and Furious franchise, and has expanded its theme park operations, which includes Epic Universe opening at Universal Orlando Resort in 2025, as well as two new smaller theme parks to open in Frisco, Texas and Las Vegas.