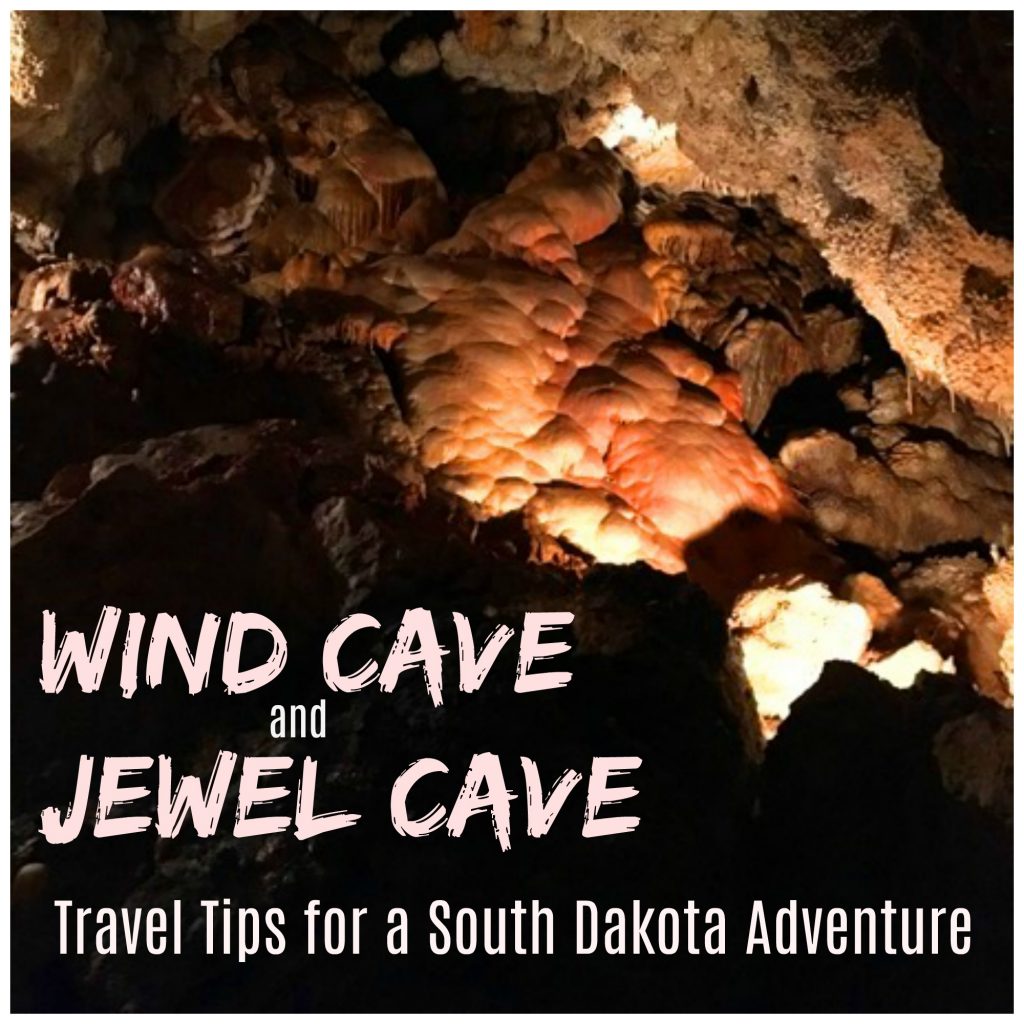 Located near Mount Rushmore and Custer State Park, Wind Cave National Park and Jewel Cave National Monument are fun attractions. If you want to enjoy the beauty of South Dakota in unique ways (like underground!), then you will definitely want to visit these parts of the National Park Service system.

At some point, you might be asking yourself, “Wind Cave or Jewel Cave?” Especially if you don’t have time to do both National Park Service locations. So hopefully these comparisons can help you make the best choice. 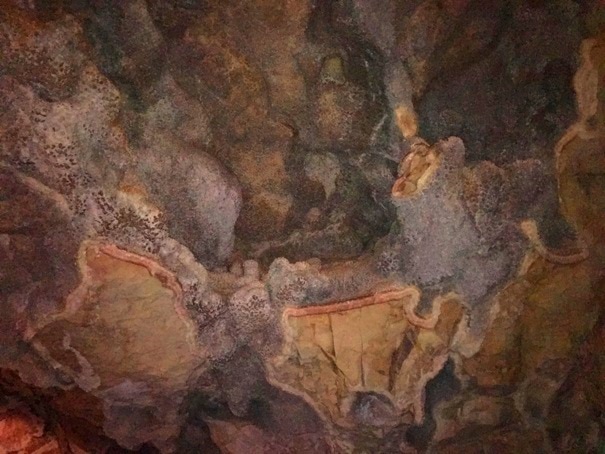 Unlike many parts of the NPS system, though, you can’t visit the caves on your own whenever you want. You MUST sign up for a guided tour to see the caves. Which means you need to make plans to see the caves – especially if you are trying to do them in one day since they are located less than an hour from each other.

These are the tips and tricks you need to know to visit Wind Cave National Park and Jewel Cave National Monument while in the Black Hills of South Dakota. 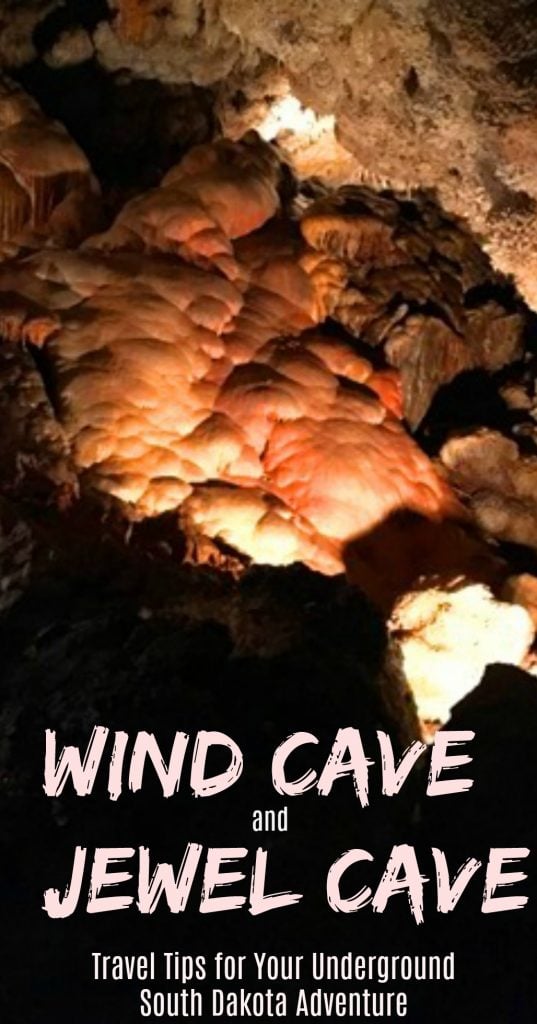 (FYI: White-Nose Syndrome is a problem for bats that live in the caves. Over 5,000,000 bats have been killed in less than two decades. Usually the NPS asks that you don’t wear the same clothes or shoes in one cave that you have worn in another. HOWEVER, you are allowed to wear the same clothing and shoes from Jewel Cave into Wind Cave and vice versa.)

One of the longest caves in the world, the miles and miles of these caves are known for their intricate boxwork formations, which kind of look like corrugated cardboard but are extremely fragile.  We took the Natural Entrance tour. Highly recommend it. Not too strenuous. 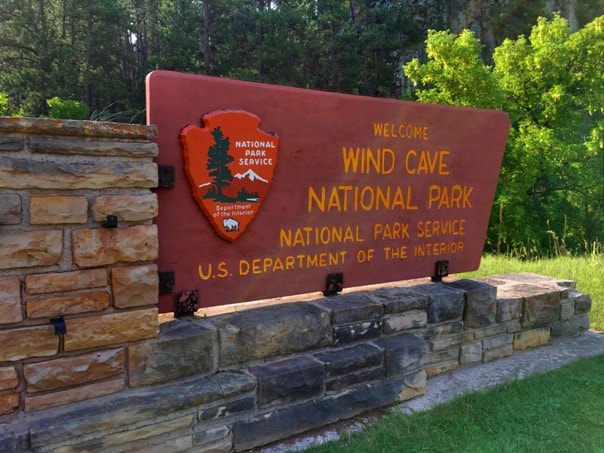 This National Park is a dramatic juxtaposition – underneath the ground is an enormous amount of dark caves still being discovered. Above ground, it seems low-key, with just endless stretches of grasslands and prairie. You’ll think there’s nothing going on in this park above ground, until bison walk by.

To visit the caves, you will need to take a guided tour. Tours cannot be reserved (other than the Candlelight and Wild Cave tours), so to make sure you get on a tour, get there EARLY! This should be a destination that is first on your list in the day. 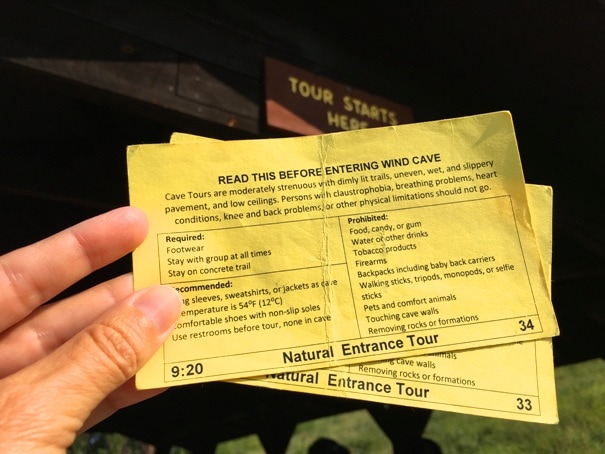 Between signing up for a guided cave tour and the actual tour itself, you’ll likely have a decent amount of time (anywhere from 45 minutes to a few hours, depending on the day, etc.)

There is no cell phone service or Wifi at Wind Cave National Park. Be prepared for being off-the-grid. (FYI: Get directions back to your hotel or next destination before you lose service at Wind Cave. Don’t plan on spending time checking emails or catching up on social media.) 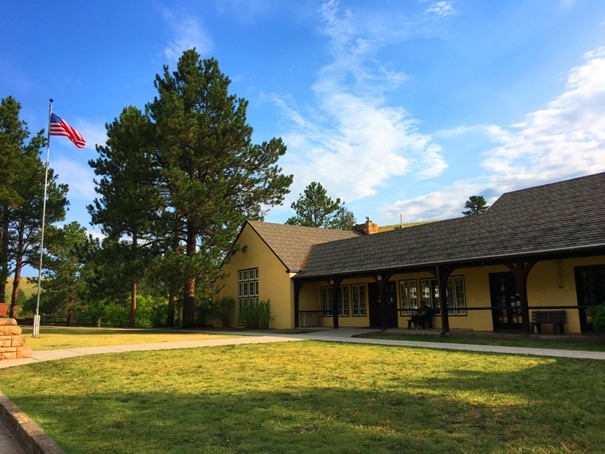 No food or drinks are available at the Visitor Center. Be sure to bring enough water, food and snacks to last you while waiting for your tour or exploring the prairie lands. We love these water bottles for traveling. They work great no matter where you are traveling. A cooler is a wise idea to keep items cold during the summer months. 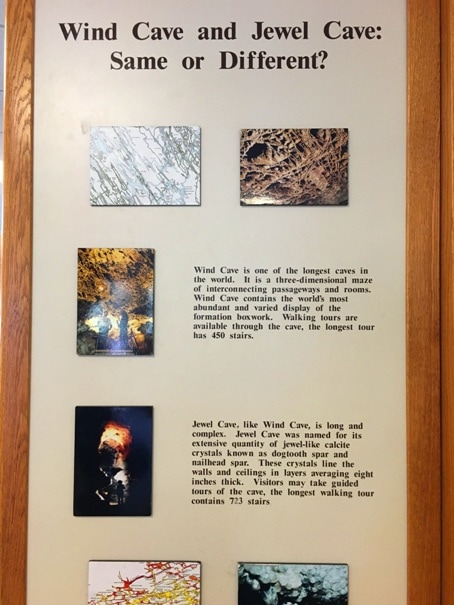 A gift shop is open in the Visitor Center. Consider adopting a bison through their unique program and get a stuffed animal as part of your package. 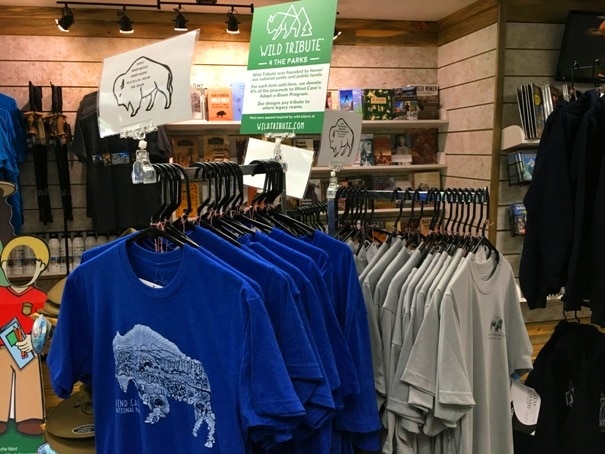 An interesting movie plays all day at the Visitor Center. Expect it to take about 20 minutes.

The caves are cool – 53 degrees. I wasn’t as cold as I expected to be. I wore jeans, sneakers a lightweight T-shirt and cotton long-sleeved hoodie and was comfortable. 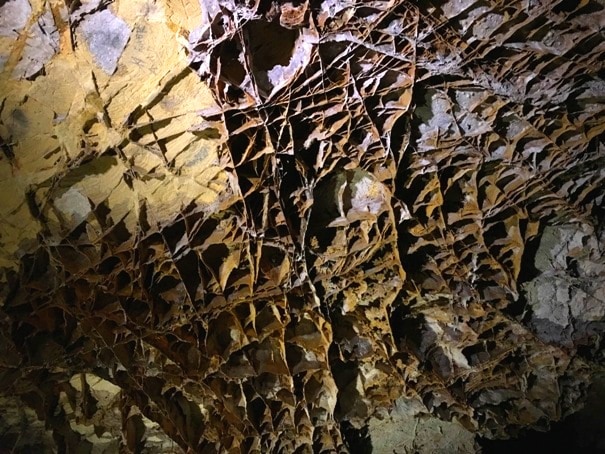 Boxwork formations in the cave.

These caves might not be the type that you are dreaming of. Wind Cave National Park’s caves are three tiers high, which means that the caves are shorter, and stacked on top of each other. So no huge vaulting ceilings like you might be envisioning.

Bison are visible on the open plains. Take time to drive or hike around. Prairie dog towns are in the park, too, to see the mischievous little animals with big personalities.

These caves are also huge (miles of new cave are always being found). They have more crystal like formations, hence the name of Jewel Cave. We took the Scenic Tour. We made reservations online – just barely – 48 hours beforehand. 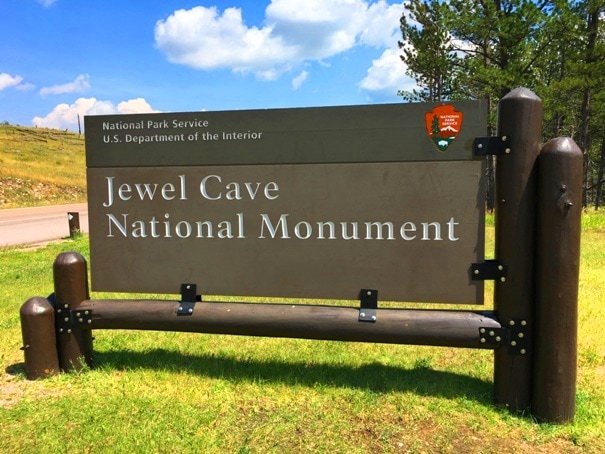 There are lots of steps, but the tour is taken in small chunks, with plenty of places to stop and rest along the way. 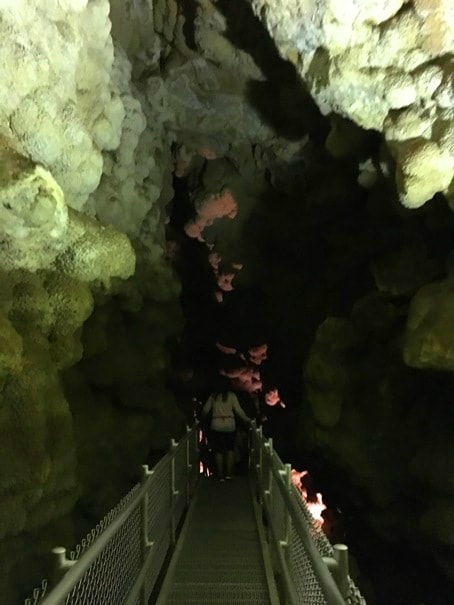 Reservations are possible for the Scenic Tour of Jewel Cave National Monument (there are other tours available, too, on a first come first served basis). I cannot stress how necessary reservations are, especially in the summer months! We reserved a tour for 3 p.m. in the afternoon. We arrived an hour early to check in and there were no tours available for the rest of the day. We saw tons of families come to the ticket line and get turned away, all looking very dejected and trying to explain to their kids why they weren’t going to see the caves.) Reservations are done through Black Hills Vacations. 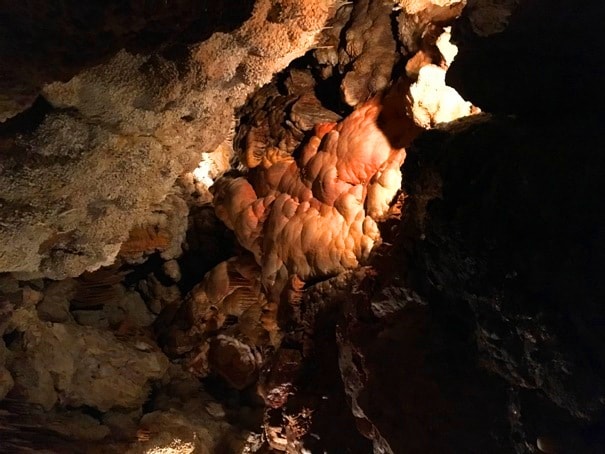 Reservations have to be made at least 48 hours in advance.

Only half of the tours (the ones on the hour) are available for reservation. That means that about 50% of tours will still be available first-come, first-served on the day of the tour. 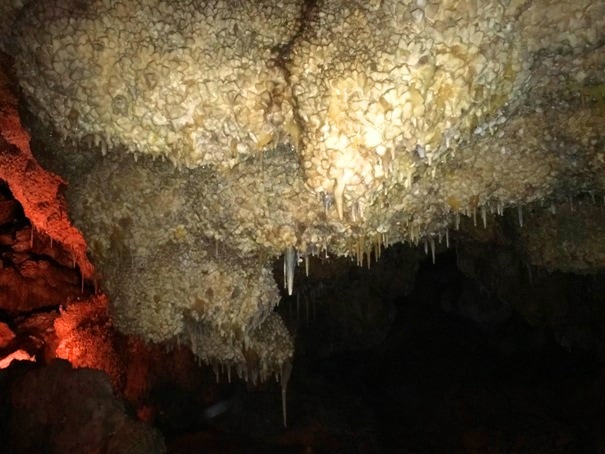 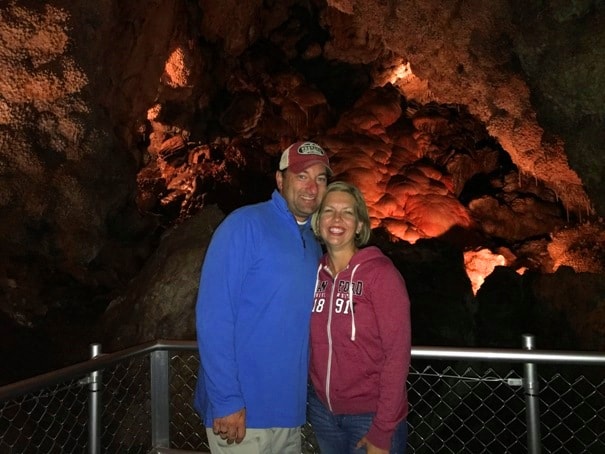 There’s not much to do in this visitor center. There is a small exhibit area which won’t take too much time to explore. A small gift shop is also available. There is no movie. The kids’ Junior Ranger programs seemed to be the most excitement going on for everyone waiting. 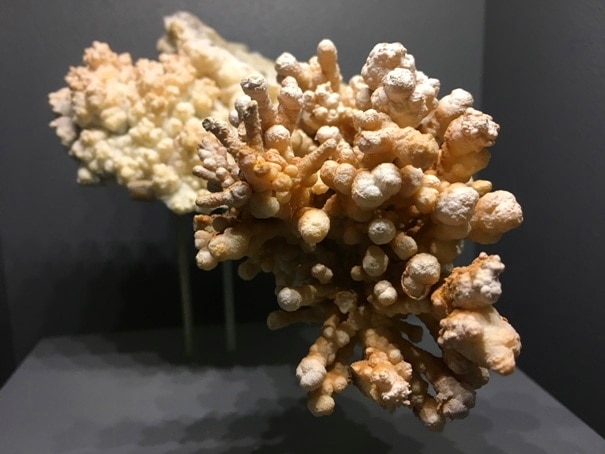 There is no cell phone service or Wifi at Jewel Cave National Monument. Be prepared for being off-the-grid. (FYI: Get directions back to your hotel or next destination before you lose service at Jewel Cave. Don’t plan on spending time checking emails or catching up on social media.) 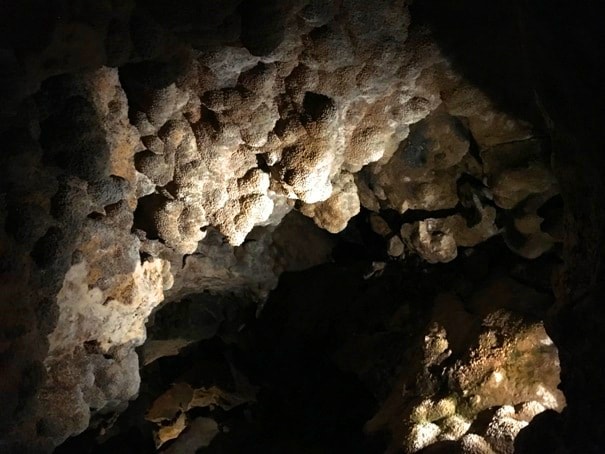 No food or drinks are available at the Visitor Center. Be sure to bring enough water (there are refill stations at the monument), food and snacks to last you while waiting. These wide-mouth water bottles are THE BEST! And this collapsible cooler and picnic organizer is a lifesaver on the road. We love ours – along with this portable oven that works by plugging into your 12 volt charger in the car so that you can have a hot meal anywhere!

Travel Tip: Black Hills Hot Air Balloons is an AMAZING way to see Custer and South Dakota’s Black Hills from above. We enjoyed a beautiful flight (see video from our epic journey).

Travel Tips for Both Caves

Fun Fact: It is thought that Wind Caves and Jewel Caves might actually be connected underground. Since only 5-10% of each of the caves have been discovered, though, explorers haven’t been able to confirm this theory. 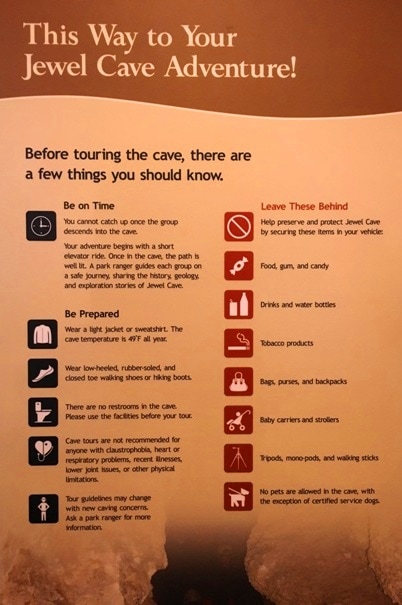 Photography is not as easy as you’d think. In fact, it’s downright frustrating and almost impossible for amateur photographers. So don’t stress about it. I only took a few photos – in places where I thought the light was the best – and they still didn’t come out. Hence not many photos for this post. Also, the tour guides aren’t that accommodating for slowing down the tour for photographers. You are on a time schedule, you’re walking in a straight line through the caves, and stopping to take photos along the way slows down the entire tour. 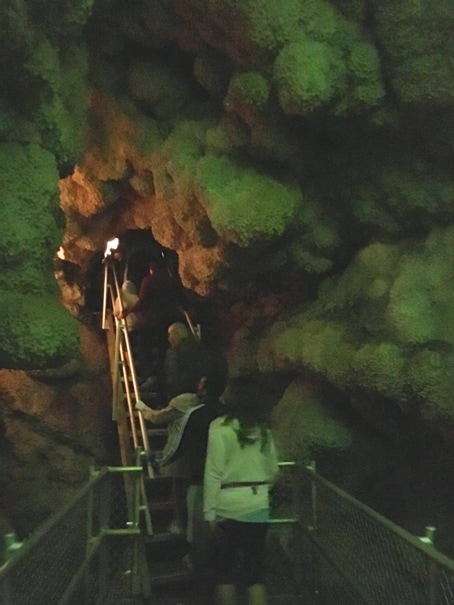 Bring books, games loaded on a phone or laptop, and other non-computerized games for kids to keep them busy. We love this National Parks Trivial Pursuit game. It’s travel sized and can clip onto your belt loop when not being enjoyed while you are waiting, and waiting, and waiting…….

Bring closed toe shoes and some sort of jacket. Climbing the metal grate stairs, as well as possible slick rock surfaces, makes flip flops and sandals a not-so-great idea for safety. Also, after more than an hour below ground, you might start getting chilly regardless of whether you think you’ll be okay.

If you suffer from claustrophobia or don’t like extreme darkness, be forewarned that the tour guides turned off the illuminating light in both of these caves for a minute or two to show how dark it really is. And trust me, it is DARK. Your eyes don’t adjust to darkness like that. So if you would freak out being in total jet black darkness, perhaps you don’t want to go on the tours.

I've been in caves and they all seem to turn out the lights which I don't like BUT I keep my eyes closed and for some reason that seems to make it all better. My husband tells me when the lights are on again. Question - Will you feel claustrophobic in Wind Cave? You said it was smaller - just wondering Thx

Hi Nancy, We didn't feel claustrophobic. However, everyone's reaction will be different. Both were really enjoyable! And I agree. I kept my eyes closed, too. Somehow it helped!

The BOOKSTORES are run by the same association and have the same products....Jewel Caves bookstore was JUST renovated before you came as well. Brand New.