We stayed on Walt Disney World property during Hurricane Dorian. As Florida residents, we decided to evacuate from our home and go to someplace where we heard was one of the safest places to be during a hurricane.

This is our story, and many helpful tips and hints, of staying at Disney World during a hurricane.

So, why, as Orlando residents, did we evacuate to a Walt Disney World hotel for a hurricane? 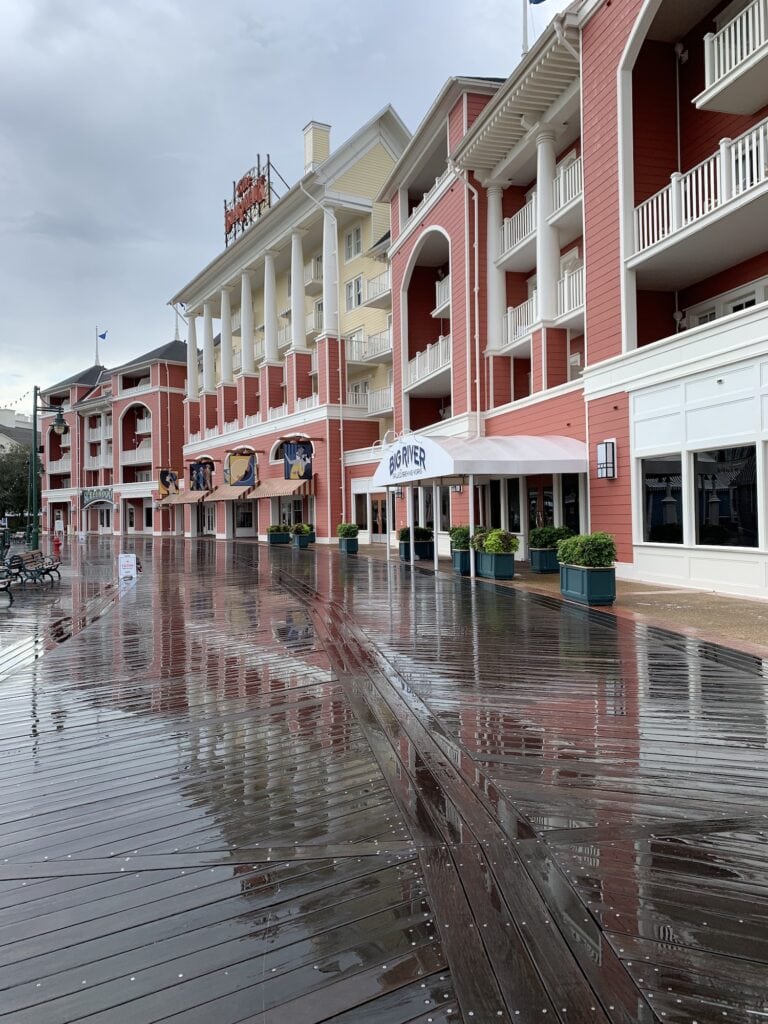 Is it Safe to Stay at Walt Disney World During a Hurricane?

As former Cast Members and long-time residents of Orlando, we have always heard that one of the safest places to be during a hurricane is at Walt Disney World.

It depends on your circumstances.

This traveler’s story about being in a hotel room during this same hurricane in Cabo will have you question whether you want to willingly stay on vacation during a hurricane. But sometimes you might not have a choice about getting out in time.

However, not everyone can evacuate to another part of Florida or another state as a hurricane approaches.

Here is why staying at Walt Disney World during a hurricane could be a smart idea for you: 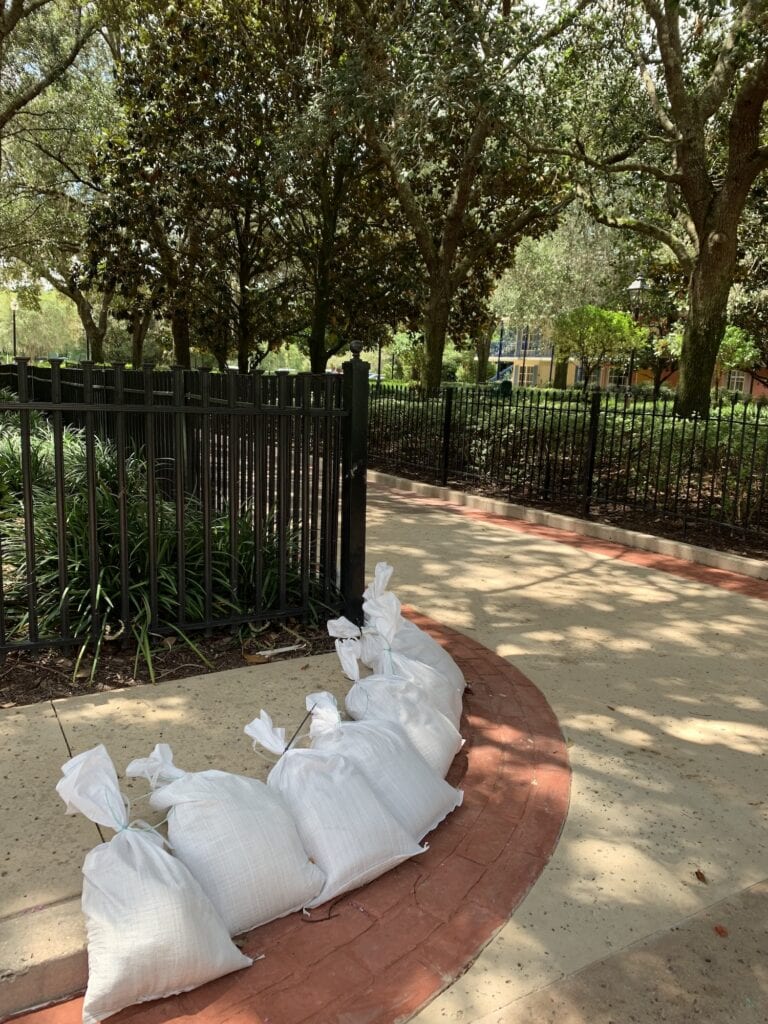 A major hurricane has not yet hit and severely damaged Walt Disney World.

But that is not to say that you will avoid catastrophic damage during a natural disaster simply by staying at Walt Disney World.

Imagineers, contractors, builders, engineers and all of the people that it takes to construct hotels in Orlando and Walt Disney World must build according to building codes that account for hurricane force winds, flooding, impact resistant windows, etc.

But no hotel could ever be fully 100% hurricane proof.

Staying in a Hotel During a Hurricane at Walt Disney World

One of the major benefits of evacuating to a Walt Disney World hotel is that there is plenty of entertainment (and often food) to keep you occupied. And not going stir crazy being cooped up inside is something that really needs to be considered!

Is Food Available at a Disney Hotel During a Hurricane?

And Disney strongly advises eating a meal before leaving the theme parks or areas with normal operating hours. They don’t want you to come back to the hotel during a hurricane expecting to have lunch or dinner at a restaurant while riding out the storm.

Dining reservations that are during a time when Disney World has officially closed its theme parks will automatically be cancelled with no cancellation fees.

When I logged into My Disney Experience app, this is the message that appeared:

During Hurricane Dorian, we were advised to watch a TV channel in our room to find out what restaurants on property were open and when.

Here is an idea of what was available and what times they were available:

Room service dining was NOT available at the Walt Disney World Swan and Dolphin hotels during the hurricane.

We had a mini refrigerator in our hotel room, so we brought some perishable items from home with us (yogurt, cheese). There was also a microwave located near the ice machines that we could have used.

At Disney World resorts, the availability of food was a little different. I have many friends and fellow Disney bloggers that were visiting or staying in Walt Disney World Resort-owned hotels. Here’s what they were reporting during Hurricane Dorian (all of these reports are for the same day):

During a hurricane at Disney World, be fully prepared to only eat a boxed meal (if available) during the storm.

Helpful Tip: You can bring outside food into Disney World at any time. Here are some of the best snacks for Disney World to enjoy in the theme parks.

Entertainment in a Disney Hotel During a Hurricane

Disney fully knows that families are there on vacation and not planning on riding out a disaster. They want to take your mind off of the worry and create a happy, less-stress environment during your stay. No matter what’s going on outside.

This is what we did as a Disney Cruise Line crew member, too, when I was working with the Cruise Director. If there was bad weather outside, we would double or triple the amount of indoor entertainment for guests by offering activities and character meet and greets that were not regularly scheduled.

You will find that there is a lot of indoor activities scheduled during a hurricane or other disaster while in a Disney Hotel. These are generally done by the recreation or characters staff.

Here’s the extra entertainment that was available at the Walt Disney World Dolphin during our hurricane stay.

The pools were open intermittently during hurricane preparation times, as well:

Other amenities, such as Swan boat rides, s’mores campfire, etc. were not offered. For this reason, our resort amenity fee was waived during our stay.

At Disney World resorts, we saw reports of the following additional entertainment:

Keep in mind that normally scheduled entertainment at Disney World could be stopped during a hurricane because of wind and rain.

During our stay, fireworks were cancelled on the night before the day the hurricane was expected to hit.

Transportation Available During a Hurricane at Disney World

During Hurricane Dorian, we were actually surprised to find out that the Disney World boat transportation system was not operating the day before landfall was expected. This was due to high winds.

Depending on the weather conditions, you might expect the monorail not be operational. If the weather was bad enough to stop bus transportation, though, I would expect the parks and all guest services to be closed on Disney property.

There are a variety of Disney transportation options in Orlando. So you can pick and choose from what’s available.

When it comes to flying, that’s a whole other story. You will need to work with your individual airline, and also pay attention to when airports in the Orlando area close (MCO, Sanford and Daytona were closed during Hurricane Dorian).

What about your own car? We were concerned about having our vehicle in an open parking lot subject to high winds, flooding, and flying debris with no protection.

There are very few places with a parking garage on Walt Disney World Resort property to store your vehicle. And, quite honestly, I don’t know if those places with parking garages would make you move your car during a hurricane (I doubt it, but can’t confirm it).

Disney’s Animal Kingdom Lodge and Hilton Bonnet Creek both have parking garages, which would offer protection from winds and flooding. We were thinking about moving our vehicle to one of those and paying for parking there, rather than surface parking at Walt Disney World Dolphin, and then taking an Uber back to the hotel. However, we decided not too.

What about RVs? Disney’s Fort Wilderness Resort did evacuate RVs from the campgrounds and help relocate the families to Disney hotels. We did see that there were a lot of RVs parked in the Disney’s Port Orleans Riverside parking lot.

We hear that Disney guests evacuating from Fort Wilderness had a choice of cancelling their reservation or lodging in locations such as Port Orleans, Caribbean Beach Resort or Coronado Springs Resort.

Evacuating with Pets and Staying in a Disney Hotel

If you are leaving your home to come to Disney World for a hurricane, then you might have pets you don’t want to leave behind.

We don’t have pets, so I was a little surprised to check in to our hotel and see lots of people with dogs. It just didn’t occur to me that there would be pets in the hotel, but I’m glad that people could bring them.

A dog next door to us in our hotel room barked all day long. I’m not sure what the situation was there. But keep in mind that pets are scared, too. So be sure to bring their toys and comfort items.

If you are allergic to dogs or don’t want to hear barking dogs, it might be wise to ask if there is a floor without dogs. I don’t know if that is even possible, but those with allergies will want to check ahead.

What to Pack to Evacuate to a Hotel

There is always so much that you want to bring when leaving your home behind in an emergency. Such as paperwork, important documents, medications, etc.

I won’t focus as much on disaster prep for those ideas. But, rather, what we brought to a Disney Hotel for a hurricane.

Do Hotel Rates Go Up During a Hurricane at Walt Disney World?

No, we didn’t find this to be the case. And we did tons of research into a hotel room during the same week before the hurricane formed.

If anything, we found that the rates might have actually dropped a little bit.

When my sister was planning a vacation down at Disney to see me, it was during the week before Hurricane Dorian would hit. And my husband and I were planning on escaping crowds for Star Wars: Galaxy’s Edge by staying at a Disney hotel the week of Labor Day (the week Hurricane Dorian did hit) and using the Extra Extra Magic Hours.

So I had been looking at hotel rates during that time, too, and continued to keep checking to get the lowest price.

However, the hurricane wasn’t formed at the time of looking for these hotel reservations. So I know what room rates were like before Hurricane Dorian was a threat, and after Hurricane Dorian looked like it would be a Category 5 hurricane coming right over Orlando.

I had priced out rooms all across property. We had found that the Walt Disney World Dolphin was among the cheapest with the best location.

On Wednesday, August 28, 2019 – which was almost a week before Hurricane Dorian was projected to impact Central Florida – the room rate at the Walt Disney World Dolphin was $146 for a standard category room.

(I got this deal after double checking the website. We previously had a hotel room for $176 reserved. But I cancelled that reservation and rebooked at the lower rate that popped up online during my search afterwards. Check out our Walt Disney World Dolphin room tour video.)

On September 3, 2019 – the day that Hurricane Dorian was to impact Orlando and Disney World the most – we had already had a room reservation for the $146 rate.

However, in preparing for Hurricane Dorian as local Central Florida residents, we were concerned at the Category 5 hurricane that looked like it would hit the East coast at our latitude. Projections had it showing edging westward which meant that if it turned, it could be a direct hit.

So we made plans to evacuate to Walt Disney World. I started looking at the room rates. I was surprised to see they were about the same:

In the end, Hurricane Dorian did not affect Central Florida very much. There was very little rain and wind inland. So while we stayed at Disney World during a hurricane, it wasn’t catastrophic (thank GOD!).

What has been your experience staying at Disney World in a hurricane? Please let us all know ion the comments below!