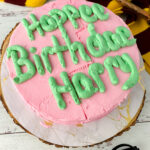 While Hargrid is a lovable giant in the Harry Potter films, he isn’t known for his spelling! So when he wanted to share a gift of friendship with the young wizard for his 11th birthday, Hagrid gifted Harry Potter a birthday cake made in a simple way with misspelled words.

What Kind of Cake did Hagrid Make Harry?

It was the first birthday cake that Harry had ever received. Which makes it so special. His birthday had never been celebrated before until Hagrid made him a cake.

This is a simple cake. And it is not fancy. It is heartfelt and made with love. And definitely imperfect. Much like all of us.

In fact, Hargrid had sat on the cake before giving it to Harry. And it was still a prized possession.

Hagrid’s cake wasn’t fancy or perfect, and neither should yours. Don’t stress about getting the frosting perfectly even or the words centered in the middle of the cake just right.

Harry Potter’s Birthday Cake in the Book vs. the Movie

Why This Cake Recipe is Special

Add all ingredients for the cake to the mixer. Mix until smooth.

Spray an 8-inch round cake pan with baking spray.

Pour the batter into the pan and bake for 35-40 minutes or until done.

Cream the butter and shortening together with a mixer.

Then add powdered sugar, vanilla, and 1 tablespoon of the dairy (either the milk, cream or coffee creamer) to the bowl. Mix together well.

Add in an additional tablespoon of dairy. Mix together on high for 3-5 minutes.

Take 1/4 cup of the frosting and put in a bowl. Add green food coloring to make it a bright shade of green.

Add pink food coloring to the remaining frosting to make it a bright pink.

Frost the cake with the pink frosting on all sides.

Add the green frosting to a piping bag fitted with a tip 10.

Write the word Birthdae across the center of the cake. Starting with this word first helps you fill in the other words afterwards.

Then write Happee above it and Harry beneath, or a custom name if you prefer.