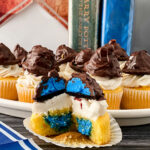 Are you looking for a fun cupcake idea for a Harry Potter party? These sorting hat cupcakes are perfect because they have a surprise element of revealing which Hogwarts House you belong to!

Just imagine kids or adults picking a cupcake off of a platter and biting into it to see which house the Sorting Hat has put them into. Everyone will be laughing and talking about which Harry Potter House cupcake they got!

These sorting hat cupcakes start with pre-made cupcakes and frosting. Or make a dozen cupcakes using an easy boxed mix.

The frosting is what makes these cupcakes so unique. So you don’t have to worry about baking!

Along with these cupcakes, make our Sorting Hat cookies and Harry Potter broomsticks for magically themed party treats.

Bake cupcakes from a box mix. Or buy unfrosted cupcakes at a bakery.

Make or purchase buttercream (not frosting).

To make the hats, split the chocolate cookies in half and remove the inside cream filling.

Arrange the cookies with the frosting side ups on a plate.

Using 1 cup of the buttercream, add it to four different bowls. (About 1/4 cup in each bowl.)

Dye each bowl of buttercream the color of the corresponding house:

If using piping tips for the hats, fit each bag with a tip 4A or tip 12. Then fill the piping bag with the colored buttercream.

You can also do this without a tip using a small plastic bag with the corner cut off.

Pipe the buttercream onto the chocolate cookies to create a witch’s hat. Pipe a wider layer on the bottom of the cookie and continue swirling the buttercream into a hat shape, with the narrow tip on the top.

Put the cookies in the freezer for about 30 minutes.

Fill the center of the cupcakes with the colored buttercream. You should get three cupcakes per color.

Replace the top of the cupcake over the frosting as best as you can. It helps if you keep each core next the cupcake you removed it from. That way it will go back in more easily.

Chances are, the top of the cupcake is going to look like a hot mess. Don’t worry about it too much. We’ll cover it up in the next step.

Helpful Tip: Place the cupcakes on a sheet of parchment paper. Write the color of the frosting beside each cupcake so you can match up the same color of frosting with the cupcakes and hats. You will probably need to do this with the hats as they are in the freezer, as well.

Add the rest of the un-colored buttercream into a piping bag with a tip 1M.

Add Harry Potter sprinkles immediately on top and then set aside.

Melt the candy melts in a bowl. Heat in increments of 30 seconds, stirring after each until smooth.

If you are using chocolate chips instead of candy melts, add a little coconut oil to the chips to help thin it out while heating.

Remove the cookie hats from the freezer. Dip each hat into the melted chocolate, fully covering the frosting with the chocolate. Let set.

Once that hats have set, add the corresponding color of frosting hat to the same frosting color cupcake. Remember that you won’t be able to see the color of frosting in the cupcake or under the hat at this point. So be sure that you have labeled each as you are making them.

These Harry Potter Sorting Hat cupcakes will definitely be popular at your party! We have even more Harry Potter-inspired recipes, including Harry Potter Cakesicles and Pumpkin Pasties.