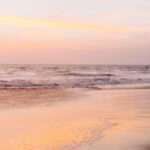 Many people want to combine a trip to Orlando’s theme parks with a visit to the beach. How far are the beaches from Orlando, though? And which one is the closest beach to Universal Studios Orlando?

There are four beaches near Universal Studios in Florida. They are all a similar distance and drive time from the theme parks.

Most are around 64 miles from Universal Studios and just over an hour drive.

Though you might not have heard much about New Smyrna Beach, it is a hidden gem that the locals love.

If you want to get to a beach to enjoy sun and surf without needing a lot of entertainment activities, this is the location for you.

You will drive past New Smyrna Beach on your way to Daytona Beach, so New Smyrna is definitely closer.

How Far is New Smyrna Beach from Universal Studios?

New Smyrna Beach is 63.8 miles from Universal Studios Orlando. It will take approximately one hour and six minutes to drive.

Daytona Beach might be the most popular of beaches close to Universal Studios, and it is also the most developed.

This beach is located to the northeast of Orlando.

Daytona Beach is famous for being one of a few beaches that you can drive on and park on. This is great if you have mobility issues and need to park on the beach, or if you just like having all of your things nearby.

Visitors can drive on the beach year round. There is a $20 vehicle user fee for the privilege of driving on designated areas of the beach.

The area is also well known as home of the Daytona International Speedway. There is also a Boardwalk and Pier, as well.

How Far is Daytona Beach from Universal Studios?

Daytona Beach is 64.1 miles from Universal Orlando Resort. It will take approximately one hour and four minutes to drive to the destination.

Cocoa Beach is located east of Orlando. It is located near Cape Canaveral and Kennedy Space Center.

If you want to see a rocket launch from the beach, this is the place to go.

A visit to Cocoa Beach can be combined with a fascinating day at Kennedy Space Center.

The Melbourne Airport, located near Cocoa Beach, is one of the options for the best airports to fly into for Universal Orlando.

With Cape Canaveral National Seashore and Merritt Island National Wildlife Refuge nearby, you can find places to enjoy the waterfront without a lot of development.

If you crave a more natural beach environment, this is where you want to go.

How Far is Cocoa Beach from Universal Studios?

Cocoa Beach is 65.4 miles from Universal Studios Orlando. It takes approximately an hour and seven minutes to get to the destination.

Though further in distance, the drive time is about the same as the other beaches because you will be driving on the 528, a toll road. Be sure to have change or a SunPass to pay tolls along the way.

Located between Cocoa Beach and New Smyrna Beach, Bethune Beach is not well known but offers the chance to get your feet in the sand without a lot of crowds.

This county park is handicap accessible and has restrooms, picnic pavilions and showers. There is nearly 800 feet of direct beachfront sidewalk that overlooks the beach.

This beach is a little bit further than the other three beaches on our list. However, the lack of crowds can make up for the extra 10-15 minutes of drive time.

How Far is Bethune Beach from Universal Studios?

Bethune Beach is 72.3 miles from Universal Studios. It will take approximately one hour and 20 minutes to arrive at your destination.

Here are more helpful guides to use during your visit to Universal Studios Orlando: