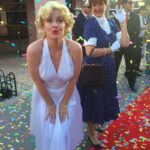 Universal Studios theme parks are all about movies, television shows and entertainment. While you can have fun without seeing the movies that have inspired the attractions and shows, it is a much more enjoyable experience if you know something about the films.

To get ready for your visit to Universal Studios Orlando, here are the movies that have inspired the rides inside the two theme parks. Each movie is listed with the attraction that it inspired, as well as the theme park in which it can be found. Plus, we’ve added the theatrical trailer for each movie for you to enjoy as you are deciding what movies to put in your Netflix or Amazon Prime queue!

The Harry Potter books and movie series have inspired one of the most popular destinations in both of the Universal Orlando theme parks. The Wizarding World of Harry Potter spans two parks, with Diagon Alley in Universal Studios and Hogsmeade in Islands of Adventure.

The theming and details of each land are so impressive that you don’t have to have read the books or watched the movies to enjoy it. However, if you know all of the little details from the series, it will definitely make it more magical to experience! Especially if you want to get a Harry Potter wand and cast spells throughout the lands.

Megatron and his villainous Decepticons want to rule Earth. You will board your N*E*S*T* vehicle and join Optimus Prime and Bumblebee in an ultra-immersive thrill ride. Fight to keep the AllSpark out of Megatron’s hands in an explosive battle between the Autobots and Decepticons.

Zap aliens in this interactive shooting dark ride. If you are familiar with Disney’s Buzz Lightyear Space Ranger Spin or Toy Story Midway Mania, this ride is similar.

The movies inspired the Jurassic Park land in the theme park. Both movies in this franchise have inspired different attractions. Watch them both if you plan on doing both attractions. There are even Jurassic World-themed kids suites at Loews Royal Pacific Resort, one of the official Universal Orlando hotels.

This thrill ride is based on the classic film, The Mummy. Hold on as you pitch forwards and then backwards in your ride vehicle, escaping from the evil Mummy Imhotep before you plunge straight down into a tomb of black abyss with no end in sight.

Fast and the Furious

This motion-simulated ride is definitely based on the movies. You will experience recreated sets and a virtual chase scene. Actual movie props are used in the attraction, so it’s definitely wise to see this movie before experiencing the attraction!

You don’t need to see the movie to enjoy this ride. After all, many a child has been scared by watching the E.T. movie! But if you’re not scarred for life from this cult classic, watching it beforehand can enhance the imagery of gliding through the recreated scenes of the film.

This roller coaster will launch you upwards towards speeds of up to 67 mph. Admittedly, this roller coaster doesn’t have much of a storyline that you need to know while riding it! However, you might like to see the movie to understand that you will be a test subject for General Thaddeus “Thunderbolt” Ross. He wants to recreate the mad-science accident that turned Dr. Bruce Banner into the incredible Hulk.

There are many different Spider-Man movies. Pick one that you’d like to know the general storyline before experiencing this indoor simulator dark ride.

Despicable Me and Minions: The Rise of Gru

You will find lots of minions merchandise and characters at Universal Orlando. Watching either of these movies is going to be really helpful for any visit to Universal, even if you don’t ride the ride!

Cat in the Hat (or any Dr. Seuss Movie)

Seuss Landing has a variety of attractions based on Dr. Seuss books. Rides include Cat in the Hat Ride, Caro-Seuss-El, High in the Key Seus Trolley Train and One Fish, Two Fish, Red Fish, Blue Fish.

Watch any of the Seuss movies, such as Cat in the Hat; Lorax; Horton Hears a Who; or The Grinch. You could also read the Dr. Seuss books.

If your kids want to sing and dance with Dreamworks’ characters, make sure they see the Trolls movie ahead of time to understand who the characters are.

If your young kids want to sing and dance with Dreamworks’ characters, make sure they see the Madagascar movie ahead of time to understand who the characters are. This is not a ride, but an immersive experience.

Just like the other children’s movies, understanding who the characters are could make the character encounter more enjoyable for young kids.

Familiarize your young kids with these animated movies so that they know who the characters are in this experience.

Who doesn’t know who Scooby Doo is?!? If you don’t, you might want to see this movie to know what characters you are taking pictures with!

An old-school movie based on the cartoon series, you might need to refresh your memory about this character before getting on the Universal water ride! Dudley Do-Right was the main protagonist in The Rocky and Bullwinkle Show.

Universal’s Marvel Land has a variety of attractions. Be sure to see these super popular movies before you go to appreciate all of the details!

There is a LOT of Simpsons references at Universal Orlando! Not only are there rides, but you will also find dining and snacks (some of Universal’s best dining options!), as well as merchandise and games. Be sure to see at least one or two episodes of the TV show, or the entire movie for a great laugh!

Back to the Future

Back to the Future used to be much bigger at Universal, with a ride that has since closed. You can still see some of the characters, though in the character zone.

You might be familiar with King Kong already, but we suggest you watch this Skull Island movie to really understand the storyline of this dark ride.

If your kids don’t know who SpongeBob SquarePants is, get them ready to laugh with an episode of the TV show, or the feature film. Then enjoy a photo opp with the characters.

Another movie that used to be bigger at Universal Orlando than it is now, Beetlejuice once inspired a show in the theme park. Today, the only reference is in a special haunted house during the extra admission Halloween Horror Nights event.

Sure, you probably know Marilyn Monroe and her famous white dress blowing up in the breeze. But do you know what movie she wore the famous dress in? Or why? Before you get your picture with this Hollywood starlet, watch the movie that made her famous (and reportedly caused the divorce between her and husband Joe DiMaggio).

Today’s kids might not be familiar with the classic Woody Woodpecker cartoon. If you can’t find a cartoon short, be sure to watch the movie that seems to bring the annoying bird to life.

Need more ideas as you plan your Universal Studios vacation? Check out these helpful guides: