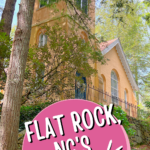 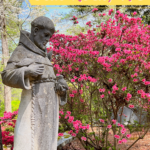 Located in Flat Rock, NC, St. John in the Wilderness is a beautiful and peaceful place to visit any time of the week. In Spring, the historic cemetery is beautiful with azaleas growing among the family plots and around the beautiful church on top of the hill.

Listed on the National Register of Historic Sites, the private chapel was built in 1833. The stone church continues to hold services, as well as free organ concerts, Holy Hikes, Blessing of the Animals and other events.

What makes this church unique, in addition to being almost 200 years old, are the historic family plots in the churchyard. Notable figures from southern American history used to own summer homes in the Flat Rock area. Many historic figures are buried in the cemetery, including:

In the 1800s, white people and slaves were allowed to worship together in the private chapel, according to Atlas Obscura. In fact, the first wedding performed in the chapel was between two slaves.

Make sure to see the grave site just outside of the chapel doors on the left hand side. It is located behind a fenced gate. This is where John Brown, who was a bugler with the Royal Scots Greys in Captain R. Vernor’s Troop in the Battle of Waterloo, was buried.

Brown survived the battle and immigrated to the United States, where he found a job with Charles Baring. The chapel and cemetery is located on land that was Charles and Susan Barings’ property, known as Mountain Lodge, at which they spent their summers away from the heat of Charleston, SC. Charles Baring was a representative of the Baring Brothers banking family from England and among the fist settlers in Flat Rock.

When Brown died in 1840, he was buried at the chapel. The location by the front door is definitely a place of honor. His remains have since been returned to his family in Scotland.

The church is so old that is still has reminders of generations ago, such as a carriage step that would have been the exit out of a horse drawn carriage to approach the church.

What to Know Before You Go

See our video tour of St. John in the Wilderness on YouTube: