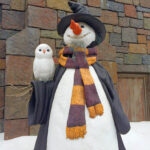 If you are thinking of spending Christmas at Universal Studios in Orlando, you won’t be alone! The Christmas holidays in the U.S. are one of the busiest times of the year for Florida’s theme parks.

After living in Orlando for more than a decade, I can tell you firsthand that Christmas is one of the most crowded weeks at the theme parks and in all of Orlando! The traffic for two weeks around Christmas is crazy busy! If you are going to be part of those Christmas crowds, or are trying to avoid the busy season, read this helpful Guide for Visiting Universal Studios on Christmas.

Is Universal Studios Open on Christmas?

The Orlando theme parks do not close for any day of the year, except for severe weather such as hurricane threats.

What Hours Is Universal Open for Christmas?

Universal Orlando Resort has three theme parks that are open on Christmas. Expect extended opening times during the holiday to accommodate larger crowds.

Universal Orlando has not yet released their official opening hours for December and Christmas 2022. Check their Theme Park Hours calendar to see dates that have been released.

How Busy is Universal on Christmas?

Once you are inside a theme park, you can stay all day until closing, even if the parks reach capacity levels. However, if maximum capacity levels have been reached, expect very long lines for attractions, food and shopping.

While wait times are often 1-2 hours for the most popular attractions at Universal theme parks normally, you might encounter wait times of 2-4 hours for one attraction on the holiday.

We suggest bringing your own snacks into Universal Studios on days like this so that you can eat while waiting in line and not waste time ordering foods. Here are some great snack ideas for theme parks.

Christmas Week Crowds at Universal Studios: What to Expect

Christmas Day (December 25) is not the only day that is busy at Universal Studios. The entire week before and after Christmas will have unusually high crowds and longer wait times.

Many people try to visit Orlando theme parks during school holidays. Schools have winter breaks over Christmas and New Years, which means there will be more visitors than normal. Orlando and Florida residents that have family coming to see them for the holidays will be looking for something fun to do, too, and will likely visit the theme parks or Universal CityWalk.

Most people who come to visit over Christmas will stay for the week until New Years. So expect the entire week after Christmas to potentially have record crowd levels.

How to Guarantee Getting into Universal Studios on Christmas

The only way to guarantee to get into Universal Studios on Christmas Day or during the weeks around the holiday is to get to the theme parks very early. Do not arrive at opening time. You must arrive at least 30-45 minutes before official opening opening to get parked, get in line, and potentially be allowed early entry.

This is when staying at an official Universal Orlando Resort hotel can pay off. You will be given early entry as a hotel guest, which helps you beat the crowds and get inside the park.

You are also guaranteed entry into the theme parks as a Universal Orlando Resort hotel guest. Even if they have reached capacity.

Be advised that hotel shuttles and shuttle boats from Universal Studios hotels will be very busy as everyone is trying to get in early. Expect longer than normal lines.

If you have a park hopper pass and have already gotten into a theme park (whether or not you are a Universal Orlando Hotel guest), you will still be able to hop between the two theme parks even if they are at capacity.

You can also expect more traffic driving into parking at Universal Studios.

While there is no guarantee that a theme park will definitely reach maximum capacity, it happens almost every year at all Orlando area theme parks. It is best to plan your day accordingly.

Does Universal Cost More on Christmas?

Universal Studios has not introduced dynamic pricing, where the prices increase as demand increases. Therefore, the base ticket price to enter Universal Orlando theme parks is the same as it is every day of the year.

However, the cost for Express Pass at Universal does increase with the expected crowds. You do not need to purchase an Express Pass to enter the theme park. However, if you are worried about standing in long lines, an Express Pass will allow you to skip the line.

With the theme parks being so busy, you can understand how everyone will want to use this benefit. Therefore, the cost of Express Pass is more expensive during Christmas weeks.

Express Passes often increase in price as it gets closer to the date of your visit. It is smart to buy an Express Pass as soon as you know for sure when you are visiting Universal Studios. As of August 2022, the cost of an Express Pass on Christmas Day 2022 is currently $179.99 each person, with the week after Christmas starting at $189.99 per day.

Harry Potter World on Christmas: What Are the Crowds Like?

The crowds in The Wizarding World of Harry Potter will be larger than normal on Christmas and the last weeks of December.

Just like the rest of the theme parks and the Universal Orlando Resort, expect longer lines for everything and more people.